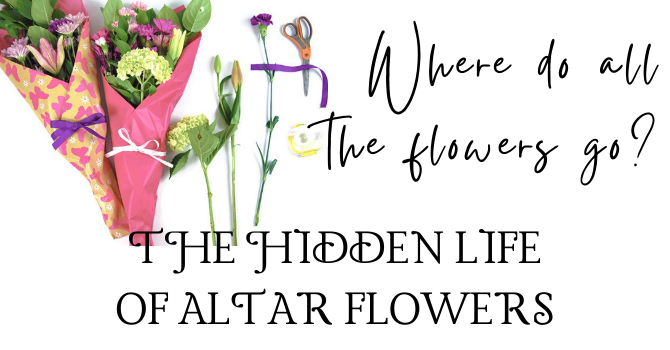 The two great vases of flowers on either side of the altar appear as though by magic every Sunday except in Advent and Lent.   They disappear without a trace after the service, generally never seen again in the church, not even in the garbage.   Often a line in the bulletin says something about the flowers having been given in the memory of a loved one in a parishioner’s family.

The Altar Guild have a lot to do with the acquisition and preparation of the flowers, and with seeing them off into the next step in their existence.   Some flowers come from parishioners’ gardens, but it takes a lot to make such large bunches, and have not been bred to sustain an extended period as cut flowers. Often parishioners sign the flowers donation sheet for the anniversary of the death of an ancestor.  They are contacted within a few weeks of their date for their preference in type and colour.  With the skills of the Altar Guild they are generally pleased with the result.

After the service the flowers are generally wrapped in home-sized bunches and turned over to people (usually members of the Altar Guild) who are willing to deliver them to their next destination, chosen in consultation with the priest.   There is a list of people who cannot come to church or who may otherwise benefit from receiving the flowers from the church.  It may be the anniversary of a funeral, or a particularly trying time.  Sometimes the flowers have another life in the chapel at LGH, or in a patient’s room.

St. Martin’s Church is about to come alive again as a building containing worshipping people.  If you wish to donate flowers for the altar you may be certain they will be at work for the church long after you leave the service.

Many thanks to Heather for this submission.