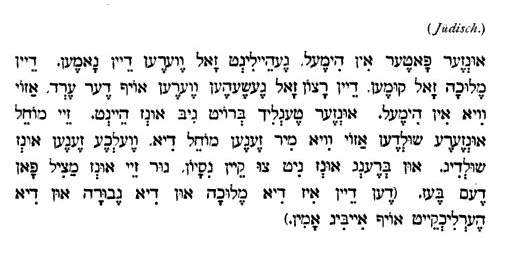 When I first heard the Lord’s Prayer introduced with the words “In the language closest to our heart, let us pray”, I was, frankly, puzzled. What had not been made clear was the intent to convey that we were free to recite whichever version of the prayer we chose, regardless of what was printed on the page. When the modernized liturgies were introduced in the 1970s, the Lord’s Prayer elicited, perhaps, the most contention. “How dare they take this beautiful prayer that I’ve known since childhood and recast it in this clunky, inelegant version?”  A fair point, but to be honest, when was the last time you said ‘art’ or ‘thy/thine’ in casual conversation?

There is power in language, power to move the emotions, power to persuade or to motivate, power even to stupefy us with its beauty, but also, sometimes, power to confuse or even to deceive outright. Any English version of the Lord’s Prayer is a translation, and all translation is interpretive. (There is a saying among professional translators: “A literal translation is no translation at all.”) However, now is not the time to delve into the theory of translation.

Let us begin with the version likely to be best known to us, the one from the Book of Common Prayer. Here it is in its first version, from the Boke of Common Praier of 1549:

As our sauiour Christe hath commaunded and taught vs, we are bolde to saye.

Our father, whyche art in heauen, halowed be thy name. Thy Kyngdome come. Thy wyll be doen in yearth, as it is in heauen. Geue vs this daye our dayly breade. And forgeue vs our trespaces, as wee forgeue them that trespasse agaynst us. And leade vs not into temptacion.
The aunswere. But deliuer vs from euill. Amen.

Apart from the somewhat outlandish spelling (note that v and u were considered the same letter—it was merely calligraphic preference to use v at the beginning of, and u within words), it is the version we know, albeit lacking the doxology (“For thine is the kingdom…”). Curiously, it was to be recited by the priest, with the congregation supplying only the last line. There is one notable difference from the 1962 BCP version: “whyche art in heauen”. Sometime in the 17th century, we became uncomfortable with using ‘which’ or ‘that’ to refer to persons and ‘who’ became the relative pronoun of choice. Similarly, in the BAS version of this text, “them that” has become “those who.” ‘Them’ strikes us as odd at the head of a clause (and I’ve already covered ‘that’ as a relative pronoun). At that time, however, ‘those’ was what grammarians call a deictic—a pointing word that could not stand without something to point at (“those bells”, “those books”, “those candles”). It could point at an understood something, “those [people]” only if that something had already been introduced into the discourse. I personally adhere to “them that” regardless of which version I’m reading.

The Prayer Book, of course, predates the Authorized (King James) version of the Bible from 1611. Here is Matthew 4:9b–13 (the prayer also occurs in a shorter, slightly different version in Luke 11, but the Matthæan version is used liturgically):

Our Father which art in heauen, hallowed be thy name. Thy kingdome come. Thy will be done in earth, as it is in heauen. Give vs this day our daily bread. And forgiue vs our debts, as we forgiue our debters. And lead vs not into temptation, but deliver vs from euill: For thine is the kingdome, and the power, and the glory, for euer. Amen.

Here, the spelling is essentially our own (residents of Seattle—or Mariners fans—above a certain age will be amused by the spelling of ‘kingdom’). Yet here we have not trespasses, but ‘debts’ and ‘debters’ (sic). To us, these words convey primarily financial obligations, but the fuller sense is that of a transgression for which restitution is owed. The BAS version’s “forgive us our sins…” is pithier but fails to convey the sense that these ‘sins’ are personal transgressions against others rather than sins in some more general sense. What’s more, what is being forgiven is the obligation to repay, not the transgression itself. On the whole, biblical translations favour “debts” and “debtors” for Matthew. Luke has “sins” but still “everyone indebted to us.” I leave further explication to the theologians. This version also includes the doxology, which may be found in several later Greek manuscripts of the New Testament but which does not appear in the earliest texts.

Yet we can go back further, for earlier English translations exist (and are favourite examples in introductory textbooks of Linguistics and English Literature). Here is an 11th century version in the West Saxon dialect of Old English:

Þ and ð both represent ‘th’ (e.g., “gewurthe thin willa”). ‘Gyltas’ appears for ‘trespasses/debts’ (a forerunner of ‘guilts’, but not exactly of the same meaning). The language is almost alien to us, and even quite different from the English of just a century later (after the Norman invasion), but you should be able to puzzle out a good deal of what’s what. (It may help to know that f between vowels is pronounced v, so that ‘heofonum’ and ‘yfele’ become a little more transparent.) Hlaf in modern English is ‘loaf’ and soþlice is ‘soothly’ or ‘truly’, a translation of amen.

Nearly 400 years later, the Bible was translated into English by John Wycliffe, a comtemporary of Chaucer:

There are clear resemblances to both the earlier and later versions. One perhaps puzzling feature is the use of y for g in words like ‘foryyue’ (forgive). In Old English, g before i, y, or e was pronounced like y, a pronunciation that persisted in some Middle English dialects and which is here enshrined in the spelling. Dettis and dettouris show the original spelling of the word—the b was added in the 16th century by pedants who felt that the word should represent its derivation from the Latin debitum. The source of Wycliffe’s translation was St. Jerome’s Latin Vulgate and “our bread over other substance” is a somewhat clumsy (and literalistic) translation of the Latin “panem nostrum supersubstantialem.” Our supersubstantial bread? Translation is interpretation, remember, and is often given freest reign when the original is unclear. The Greek text is problematic, and most scholars agree that ‘daily’ is not an adequate rendering (at least according to that unimpeachable arbiter of truth, Wikipedia). Jerome had his own theological axe to grind. Substance is that which ‘stands beneath’ or underlies our perception. Supersubstantial refers to what lies above our perception. Jerome is explicitly tying the concept of earthly sustenance (daily bread) to that of spiritual sustenance (the heavenly bread of the Eucharist), Sometimes translation as interpretation crosses over into tendentiousness.

By now I’ve got quite far beyond the “language closest to our heart” (except, perhaps, mine, as I fell in love with Thomas Malory’s 15th century Arthuriad—in the original spelling—as a teenager). But the phrase is open-ended, isn’t it? Suppose the language of your childhood was Italian. Surely, the invitation allows you the option of reciting “Padre nostro…” If your heart’s in the highlands, I have little to offer you, but gin ye sich aftir the lallans, here is a lively version in Scots:

Faither o' us a', bidin Aboon! Thy name be holie! Lat thy reign begin! Lat thy wull be dune, on the Yirth as in Heeven! Gie as ilka day oor needfu' fendin. And forgie us a' oor ill deeds, as we e'er forgae thae wha did us ill: And lat us no be sifit; but save us frae the Ill-Ane! For the croon is thine ain, and the micht and the glorie, for evir and evir, Amen!'

And so, I come at last to an explanation of the illustration at the top of this article. As you would expect, it is the Lord’s Prayer—not in Hebrew as you might first think, but in Yiddish, a language I have come to love as director of The Vancouver Jewish Folk Choir. It is a relative of German spoken by Ashkenaz Jews throughout northern and eastern Europe (and in New York, which has the largest population of Yiddish speakers in the world, although it may surprise you to learn that Montréal and Winnipeg are right up there). It is written in an adaptation of the Hebrew alphabet, but this example is in an elevated, old-fashioned style. The vowel points, or nekudes, are almost all redundant, for Yiddish already employs certain of the Hebrew consonants to represent the vowels. If it were written in modern Standard Yiddish, it would also be shorter by thirteen letters. Reading it is a bit like reading the 1549 Prayer Book version. Now, to be truthful, the 1962 Prayer Book version is probably in “the language closest to [my] heart,” but I feel I missed an opportunity last Sunday, for if there is ever a time to recite the Lord’s Prayer in a language other than English, it must be Pentecost. So don’t be too surprised if a year from now, you chance to hear me saying: