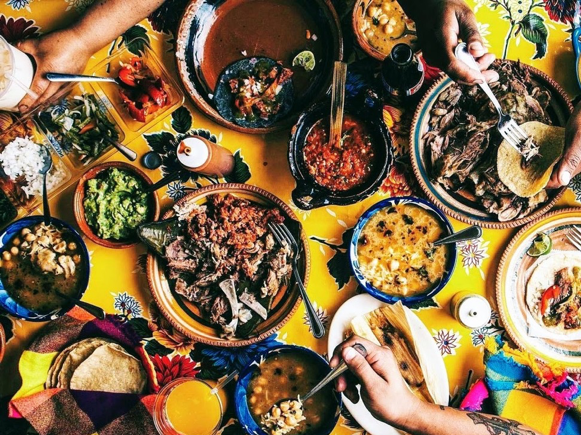 “What is to prevent me?”

Wind of God, keep on blowing.  Sail over the barriers that we build to divide ourselves from each other.  Pick up your seeds of freedom and truth wherever they flourish, carry them across frontiers to be planted in other soil, to begin fresh growth and new forms.

Cristina Martinez is the queen of barbacoa in Philadelphia, the city named for brotherly love.  She wasn’t born there, but in the small town of Capulhuac in central Mexico.  Married at seventeen, she was immediately put to manual work in her husband’s family business making and serving tacos.  When her only daughter was old enough, she sent her to boarding school, left her abusive spouse, and fled the country.  Cristina entered the United States as an illegal alien after 15 days crossing the desert.  Once across the border, she begged for jobs in restaurants so she could send money back to her daughter for school fees.

With her skills she rose to pastry chef at a respectable restaurant.  But when she asked her boss for support to get a green card, she was fired.  Nobody wanted an undocumented immigrant on staff.  With her partner, she cooked and served tacos and soup from their apartment.  Word spread through the Latino community:  here was food and fellowship to draw them together in exile.  Cristina saved enough to start her own restaurant and called it South Philly Barbacoa.  In 2016, Bon Appetit magazine named it one of the Top Ten Restaurants in America.

But this mother still cannot cross back to Mexico to see her daughter, now trained as a nurse.  The border walls are high, both physically and politically.  Her family in Mexico prays for her at every meal as she continues her fight in the United States.  Through the Univision Foundation, she continues to advocate for immigrant rights.  She draws attention to the barriers that keep people from full participation in society even as she feeds their bodies.  What prevents justice is the lack of will on many levels to listen to those outside of power, and the lack of value that society places on the work of those on the margins.  With voices like Cristina’s calling for change, more people are becoming aware of how our systems exclude the other.

The good news is that God does not exclude.  At least, that was the plan right from the earliest days of the Church.  Our Bible gives us stories of hope to apply to new settings.  They challenge us to continue the mission of tearing down barriers to inclusion, of taking our part in the gospel way.

In the book of the acts of the apostles, the episode of Philip and the eunuch is what the Church is about.  The scene is a wilderness road from Jerusalem to Gaza.  Here we meet a court official on business travel.  He may be devout, but he can never be a Jew because of sexual prohibitions against eunuchs.  He may be part of the bureaucracy of a foreign monarchy, but he is an outsider here because he is black.  He may be rich and hold an important job back home, but he is looking for spiritual treasure.  When in Jerusalem, this person wouldn’t even have been admitted to the men’s court at the Temple.  As much as he would like to understand the faith, he doesn’t belong and has no one to teach him.   There are too many barriers.

Then he sees Philip walking alongside his chariot.  Offering to share his Uber ride, the two enter into conversation about who Jesus is and what he has made possible.  Here is a faith that doesn’t look down on him or block his entry through baptism.  When the official spots some water, he asks the million dollar question: “What is to prevent me from being baptized?”  And the amazingly wonderful answer for him and for every other person on the planet is “Nothing!”  In Christ, there are no barriers.  Not race, not sex, or class or ability.  His sacrifice on the cross, his life taken away from the earth, has released the power of heaven to erase all sin.

Philip’s job is to proclaim and witness to this truth.  And when this is done, the Spirit of the Lord leads him on to the next challenge.  The Ethiopian is left to rejoice and begin living out a new life.  He is now part of the Church, with a mission from God to help take down the barriers to abundant living.

So how are we doing with that?  Humans are very good at building walls when we could be opening up doorways and windows.  Our social institutions like to protect themselves at the cost of others.  That makes it harder to hear those who are outside.  Like the boss who refused to keep Cristina as a restaurant worker once he found out she was in America illegally, we can be hesitant to recognize and address the wrongs.  It is easier to perpetuate the minimum wage, the welfare rate, the use of undocumented immigrants without health benefits, if we don’t encounter people like that in our circles of acquaintance.  Where we are made uncomfortable and aware is within the Church.  It is one of the few places where we explicitly say and practice that all are welcome.  No barriers to participate.  No barriers to baptism for any who accept Jesus Christ as their Lord and Saviour.  It’s a growing edge for us.  If Jesus suffered and died for me, and Jesus suffered and died for you, that means that I have to accept you as Christ’s own too.  God’s comprehensive love breaks down all the barriers between us.

What does it mean to proclaim and practice that the borders of this kingdom are open to all who want to enter.  And that the guard and guide we turn to is our Lord?  How do we help others on this wilderness road?   Asking questions is always a good place to start.  Listening to the responses is even more important.  Consider who around us are being prevented from living more abundantly.  As individuals of faith and as a community of faith, the ways in which we engage make a difference.

In our history as the Church, there have been struggles to dismantle barriers that have been embedded from the wider society.  Look at the abolishment of slavery, the re-marriage of divorced persons, the ordination of women, the inclusion of LGBTQ2S+ individuals, reconciliation with indigenous communities, and the exposure and realization of structures of racism.  It is difficult to both recognize and then do something about the divisions.  But we have to keep coming back to our baptismal covenant.  Each of us, in the moment that we are signed with the cross, is marked as Christ’s own forever.  With that power, what is to prevent us from continuing to help make the kingdom come?  Amen.