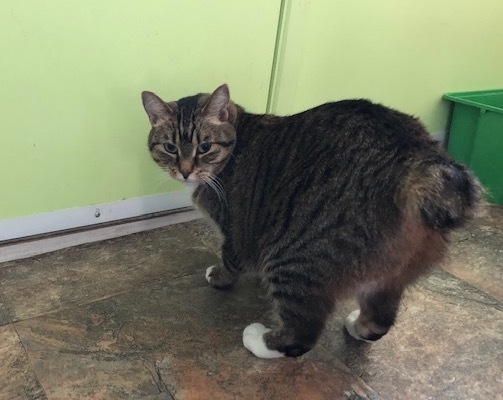 “Blessing them, He ascended into heaven.  Gone, but not gone.  Ascended but still with us.  Alive among us, among us, Us!  No longer sad at his leaving, we wait in joy and wonder for the Spirit.  Blessed, we wait to do his bidding, to go out to all the world, to tell the Good News that God loves us so much He chose to live among us.  Crucified Risen Lord lives still among us.  Lo, He is with us always, even unto the end of the world…”

My cat has faith.  Or at least, the concept of object permanence.  She stares at the kitchen door.  A quiet mew.  A gentle scratch.  She knows there is something beyond that barrier because she has seen humans open it to pass through.  She wants to go out onto the deck.  Maybe somebody will be kind enough to reward her persistence and open the door.  I feel a little guilty when I leave the house in the morning and tell her that she can’t come with me. But I know the cat doesn’t spend the whole day sitting there at the stoop and looking up hopefully.  She has other cat things to do while she is waiting.

It may not look like much to some, but waiting does not equal doing nothing.  In-between times are full of learnings. Not knowing what is coming next can concentrate attention on what is possible now.  When we are grieving what is no longer and can’t yet stretch our minds or hearts to the long-term future, we still are adapting from hour to hour, day to day.  Part of that is picking up old habits that still nurture our inner lives as we figure out new strategies for coping.  And as the situation changes, we get ready for the moment when the door opens again to glimpse a new world.

Here are the followers of Jesus, standing on Mount Olivet near Jerusalem, looking upward as Jesus leaves them to ascend into heaven.  He has made them promise to wait in Jerusalem.  They are to stay together because God the Father has promised to send them the Holy Spirit.  How difficult it must have been for them to watch Jesus disappear.  Would it be like bidding someone goodbye at an airport?  First you exchange your last loving words, then you hold them close, and finally you watch them walk through the boarding gates until they are hidden from your sight.  You might hang around a little longer to see the plane lift until it is lost in the clouds. Then it’s time to wipe the tears and head back to the rest of your life.  You probably wouldn’t set up camp in the airport hoping for their return.

For the disciples, sticking with each other didn’t mean they should stay on the hillside looking up.  They had their orders: go back and wait in the city of death and resurrection.  Jerusalem was not a safe place.  The holy city was seething with tension.  People from all over the Mediterranean had come to celebrate Passover under the nervous watch of the Jewish religious leaders and the suspicious eyes of the Roman authorities.  The events of the crucifixion and reports of Jesus’ rising from the dead were emotionally explosive as word started getting out.  Now, seven weeks later, the next Jewish festival is approaching.  Pentecost, or the thanksgiving for First Fruits approaches.  Again, the streets of Jerusalem are going to filled with people of all races and cultures and political ideas.  This isn’t a quiet refuge to retreat and regroup.  Jesus is putting their faith into practice.  Go and be Christians in the midst of uncertainty.

In the first chapter of the book of the Acts of the Apostles, the challenge is taken up.  Jesus has told them “you will receive power when the Holy Spirit has come upon you; and you will be my witnesses in Jerusalem, in all Judea and Samaria, and to the ends of the earth” (Acts 1:8).  In preparation, the disciples keep practising what they have learned from their Lord.  They pray together, they worship together, and they share good news stories wherever they meet people who will listen.  In other words, they get busy with spiritual development, communal life, and mentoring and succession planning.  So the circle of followers keeps growing.  From twelve to one hundred and twenty to three thousand to us today.  All because they had faith to practice even when they didn’t see beyond the next step.  They reached out to the world.

God gave them each other to encourage the community in the in-between time: marking the days from Jesus’ going up into heaven to the gift of the Holy Spirit.  And they need encouragement, because life in Jerusalem can be dangerous for those who associate themselves with a crucified criminal.  There are many powerful leaders who misunderstand what the kingdom of God is about.  And there are those who feel that these new Christians threaten their lives and their land.  Instead of bringing peace between peoples, differences in faith can tear communities apart.  Tragically, that is still true.

Jerusalem is a city that is not at unity in itself, in spite of the peace we continue to pray for in Psalm 122.  This week we have witnessed again the pain and destruction that Jews and Christians and Moslems, Arabs and Israelis, have caused in the city we each call holy.  Open conflict exploded again at the collision of two major festivals.  The Israeli political holiday commemorating control of the old city after the 1967 war coincided this year with the end of Ramadan- Eid al Fitr.  People of different faiths and experiences clashed on the streets that were already disputed territory among Jewish and Palestinian settlers.  This city marks both where Jesus ascended and Mohammed later is recorded as being transported to the heavens.  What is left behind down here besides bombs and grieving and angry families?  Where is the Spirit?

We are not all in the earthly city of Jerusalem, of course, but we do live in a world that is both fearful and divided.   We are all still waiting for Christ to return in glory.  That doesn’t mean that the Holy Spirit cannot be working through us now.  What we do in these between-times makes a difference.  Waiting doesn’t mean doing nothing.  God may feel out of sight, but in imagining community across barriers we stir the flame of hope and peace.  Groups are separated by real cultural and historical differences.  They struggle to access the same resources.  But the promise of Pentecost is that humanity can move beyond tribalism to a way of life that is open to all nations and peoples.  If the Holy Spirit can motivate us to pray for our enemies and help those who hate us, what a wonderful witness!  In the Holy Land, there are Jews and Arabs who care for their neighbours in spite of the political and religious rhetoric of hate.  God works through those who practice compassion and call for coexistence.

And what about us, as we imagine possibilities for community?  Sometimes doors don’t open immediately.  Prayers don’t get answered the way we expect.  It feels like Jesus is on the other side of a cloud of unknowing.  It is good to seek the Spirit in the ways that our community touches others with kindness and care.  The time will come when the Lord will restore the kingdom even to Israel.  We can help a little even while we wait. Amen.