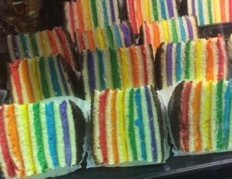 Help me to speak the truth in Christ.  May your Holy Spirit guide my conscience and my actions, that I may live out who I truly am and recognize others as they truly are: children of the one Creator.  Amen.

After twenty years of being a missionary and a pastor, Paul has much to share about his understanding of the life, death, and resurrection of Jesus. Even before that, he was a teacher of Jewish law- a Pharisee.  Now he is wrestling with words to express himself in a letter to Christians who are not Jewish.  They are part of a history that stretches back to Adam and forward to the Church today.  With his run-on sentences, Biblical references, and Greek translation, Paul is not always easy to understand.  Sometimes, it’s like listening to a long-distance telephone conversation without a hearing aid.  But chapters 9 through 11 of the Letter to the Romans is worth paying attention to because it relates to each of us today. In it, we discover our true self in the eyes of God.  We are all beloved and redeemed children.  Don’t believe anyone who says otherwise.

Paul begins chapter 9 with strong language.  “Dang it all- I swear I am telling the truth!”  Verses 1 to 5 go on to lay out his problem.  “I have struggled with who I am and who the Christ is for me.  It has caused me sorrow and anguish.  Why?  I belong to a group that has always had faith in our special relationship with God.  Do I have to choose now between what God wants me to do and identification with my own people?  No.  I have to trust that this Christ is in authority over all, not just my own in-group.  I am telling you that by extension, you have to trust this is true too. Just because God chooses one group to bring good news doesn’t mean they are always right and you are wrong if you live differently.  You don’t have to be ashamed of who you are.  Live your true selves.  It’s not about conforming to fit in with how others are in order to be acceptable.  Rather, it’s about all of us following Jesus’ way.  Both the ones who bring the word of God and the ones who receive and interpret it for their situations have a role to play in God’s plan.  So let’s look at our heavenly, not our human descent.”

I wish that every missionary from the first century onwards studied and understood these verses before they went out and imposed their version of the gospel on others.  Just as Paul figured out that Christians didn’t have to become Jews in order to find salvation, so every preacher and teacher and disciple needs to pause in humility.   Christians aren’t called to “become” like anyone else.  The Spirit enters in through God’s grace so that our true self can shine through without having to conform to a particular cultural or social norm.

Each of us has a deep yearning to belong.  And sometimes, that leads to hiding parts of ourselves because we fear we won’t be accepted as part of the group; we’ll be rejected for being different.  In the early Church, some of the new converts thought that since Jesus was a Jew, they had to submit to the Jewish laws in order to fit in.  And some of the Jewish Christians, who were used to living and worshipping according to the law, thought that everybody else should follow all the observances of the Hebrew Scriptures like them.  But belonging doesn’t mean having to deny one’s core identity.  There’s room to be Christian and to be yourself.

Paul’s theology came to be known as “justification by faith”.  That is, it is not what we do that makes us worthy in God’s eyes or sets us apart.  Rather, belief in God’s mercy reveals that love is a gift.   The Jewish people were chosen by God to live in righteousness.  But it wasn’t doing things right that earned them favour with the Divine.  Instead, the covenant was about trusting to be His people no matter what others thought of them. The adoption, the glory, the covenants, the giving of the law, the worship, and the promises were all to help them be their true selves, so that God’s love can shine through to the world.

The Jews believe that in time the Anointed One will appear be the light of the world.  When Jesus came along, some came to have faith that he was the Anointed One.  Not just because he was a righteous man, or taught as one with authority, but by how he lived and died and rose again.  He was a Jew culturally and by religion, but those who see God’s love shining through to all people glimpse his true self by faith.  Israel is truly about being children of this promise: God’s mercy and compassion is for all who are ready to accept it.

We can’t judge the state of each others’ souls based on race, culture, orientation, ability, or status.  So many things have gone wrong in both Church and society when we have forced others to conform to those who hold privilege.  Our historical schisms over race and sexual orientation, wealth and status, ability and age, have hurt and diminished God’s mission of redemption. We don’t have to disguise our innermost being with God, and we shouldn’t have to in the body of Christ either.  Why would we want to inflict pain or anguish by rejecting another’s part in God’s plan?  We may not understand how all the differences fit together. But through faith we may believe that God sees and accepts diversity and can employ all in bringing a kingdom that is over all.

The kingdom of heaven is like making cake.  The batter can be poured out into a big rectangular pan, or into several rounds.  It can be divided into cupcake tins or loaves or special shapes.  It’s all cake from the same ingredients.  A basic mixture can have flavours added, or fruit or nuts, or even be coloured for a special occasion.  It’s still cake, and the recipe remains the base.  We are the results of God’s creative bakery, and we don’t have to be all the same, or expect others to fit the same mold.  What good news to know that God loves each of us as we truly are, in all our diversity and uniqueness!  After all, God made each of us the way we were meant to be.  Paul says that In Christ we can live our true self, so in the Church we are called to accept each other in his name. Amen.

Rough Waters True Self What then are we to say about these things?