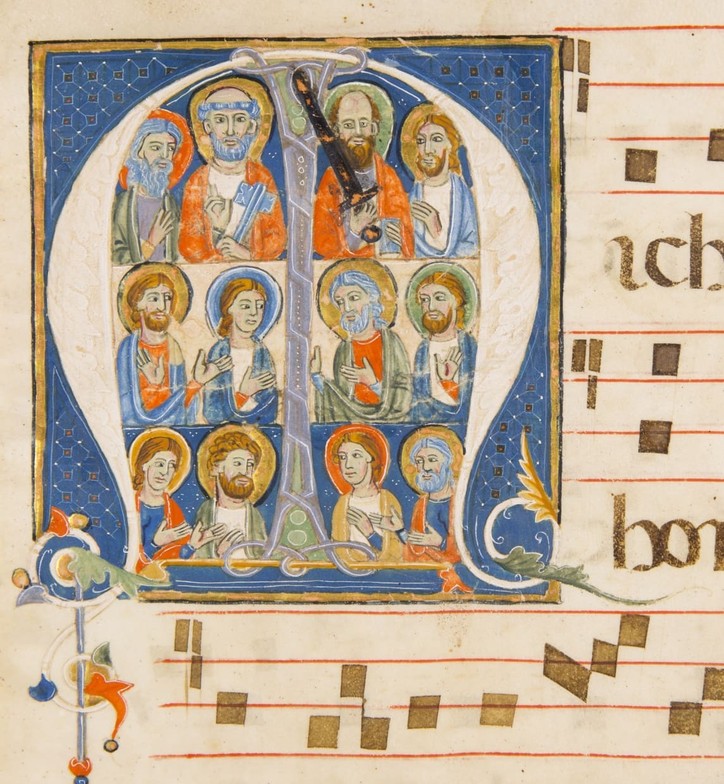 When Richard was studying at Notre Dame for his PhD, he was the regular supply priest for a small church in Berne, Indiana, in the midst of corn and wheat fields, where we were as likely to see as many Amish carriages as there were cars on the road as we drove in for Sunday services.  We learned that children in the parish had not been receiving communion despite it being the Episcopal Church’s norm for about ten years.  So Richard did some teaching about the meaning of baptism that Lent, leading up to all the children of the congregation receiving their first communion on Easter Sunday.  Easter in Berne can be lovely, fields newly planted and some green coming on, people coming dressed in their best, and bringing baking to share at church – and leave anonymously in our car.  There was the joy of Easter and the joy of the children’s first communions.  But one older lady in the congregation, grandmother to one of the children, came up to Richard toward the end of the line down to the Hall and told him, ‘I was really disappointed.  It should have been a special Sunday.”  Richard was flummoxed:  what Sunday could possibly be more special than Easter Sunday?

Clearly she expected something different – something more like what I imagine might have been a norm in a Roman Catholic church:  the young people the centre of attention, dressed in white, as they receive that first wafer on their tongues . . .  perhaps that is what she meant.  A rite of passage – from childhood toward adulthood.  Instead, we had celebrated the core rite of passage for all Christians, the passage from death to life.  But she was expecting something different, and she just didn’t get it.

In our readings today this seems to be the case in three of the stories we hear >>  things get in the way so people do not see what is going on in front of them.

The people Jesus grew up welcome the son of Mary and brother of James and Joseph, Judas and Simon; they think they know who he is.  But they don’t.  They are unable to see that he is Gd’s chosen agent, and that Gd works through him, speaks through him; they are unable to make room for surprising grace and so the fruits of grace which were most usually what happened when Jesus visits and teaches, are poor – “”He could work no miracle there, except that he put his hands on a few sick people and healed them, the Gospel says.  “And he was taken aback by their want of faith.”

Things get in the way.  Expectations and familiarity both prevent us from seeing what is in front of us.

Paul tells the Corinthians about an extraordinary experience he had – so extraordinary, so imbued with the power of the Holy One that he can only speak of himself in a ‘round about way --  The Corinthians had a number of problems, the largest of which was that some had a puffed up sense of spiritual elitism, confusing estatic experiences as the “be all and end all of faith” instead of love-in-action. But they had nothing on Paul!  He had experienced Paradise – he had been taught directly by the Risen Lord (he alludes to this in the Letter to the Galatians).  And what he learned was that the moment he depended on his extraordinary experience and what he had gained from it, he’d fall flat on his face.  He doesn’t give us the particulars.  He does tell us that Gd would not remove the ‘thorn in his flesh’ that kept him humble.  He learned that only when he was weak – depending on Gd – could Gd’s work be done.   Life is about faithfulness to what Gd asks of him, not about ideas and planning, not about his energy.  Paul, without humility, gets in the way, and Paul, knowing who he is and whose he is, makes way so that grace abounds.

What Jesus asks of his disciples when he sends them out on a practicum gets closer to home.  Being who they were, they would have been walking in sandals.  They weren’t to go to the 1st century MEC to get better hiking boots, their sandals would be enough. Nor were they to carry extra baggage – OMG – I think of how every time I travel I do my best to reduce my luggage, and still I can’t get down to one carry on!  But them, no extra food, no money, not even a rucksack.  Which meant they had to depend on others to meet their basic needs as well as the emergency when a sandal strap broke.  (Probably where St. Francis got his idea of holy poverty as the model for Franciscans.) They had to depend on Gd, and Gd tends to use people.  Going out supplied and sufficient would have gotten in the way of letting Gd in so that grace could abound.

There is a simple message here, even a simple principle:  believe it or not, things get in the way of Gd.  Things like

The hard thing about familiarity and expectations is that we don’t usually know we’re operating under their influence until we bash up against them – I have a hunch that these are getting in our way a lot more than we know, more than we’d admit.  I have to keep looking at that – we all do.  What I know is that now more than ever in my lifetime, the church needs the abundant grace of Gd.  Instead of bemoaning our limitations, we need to remember that when we are weak, then Gd’s strength is more than sufficient for us.  When we depend on Gd, our hope and trust clear the way for Gd’s saving action.  It isn’t easy, personally or corporately.  It isn’t easy.  It is the way that Jesus lived – the Way of the Cross, we sometimes call it.  The Pathway of Life it is sometimes named.

All these things that get in the way don’t belong on this path. Self-sufficiency and adequate resourcing seem like sound economic thinking, but not in Gd’s economy.  It’s really hard to be the church in our world and asked to live according to Gd’s economy.  Especially in times of hardship, limited resources.   The idea of living in hope, expecting grace, isn’t easy, and looks foolish.

Skepticism?  Well to other ears that might just be practicality speaking.  Common sense.  Who is to judge?  But skepticism and assumptions are what kept the people in the village in the Gospel from encountering Gd in the midst of them.  Better we should choose vulnerability and wonder.

Extraordinary experiences?  Fear?   The Psalms teach us a lot about them.  Over and over IN the Psalms we hear recitations of what Gd has done for Israel – extraordinary things starting with protection from the plagues in Egypt, deliverance through the Red Sea, and manna in the wilderness; Salvation from drowning, from illness, from war.  Songs like this aren’t sung in times of comfort – they are sung in times of fear.  They are sung to arouse courage and hope.  They are sung as reminders of the good things Gd has already done, so that we may wait for the good things Gd is yet to do – living in hope: Remembering the great love that saves us over and over.

Things get in the way – and looking at them we are reminded that what we choose can make a great difference:

Not only ·         extraordinary experiences of the Mystery and not fear

We sing songs of memory and praise, so that we may have courage and trust

Things get in the way of Gd, in the way of faith, in our way.  We can choose to carry on, to stay stuck, or, in light of the Gospel, we can make different choices.  Choices that begin by asking where we have gotten in the way, and moving on from there.  In the light of Christ, with humility and some trembling, we can let the Holy Spirit clear the path so that we live depending on Gd and Gd’s agents to help us, and what Gd asks us to do will get done.   AMEN.