the lamp had not yet gone out 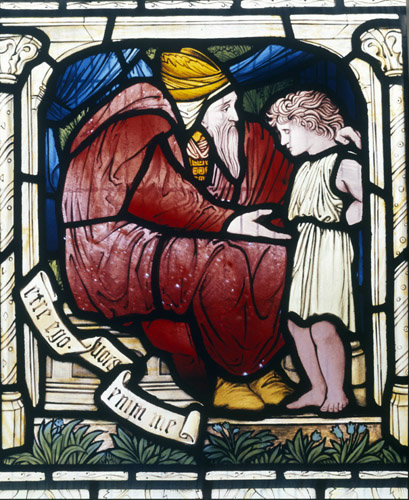 “The lamp had not yet gone out”

Your word is a lamp to my feet and a light to my path.

I have sworn an oath and confirmed it, to observe your righteous ordinances.

Now I am severely afflicted: give me life, O Lord, according to your word.

Our Hebrew Scripture reading tells about the faith of the boy Samuel.  It also tells another story of faith: that of the elderly priest Eli.  Both are important, but Samuel’s role gets a lot more attention.  I want to share with you why I believe Eli’s experience has light to shine today on facing the wrongs of our time.

In those days, worship and belief in God were hitting a low point.  Moses had given the law to the people of Israel, and Joshua had led them into their Promised Land.  Then there had been generations of settlement and conquest and war with neighbouring peoples.  Sometimes strong leaders emerged to deliver Israel and bring the Jews back to the foundations of their faith.  Then the land (and the people) had peace.   But as often as not there were times when it seemed like every tribe for itself, when nobody paid any mind to the Law or to the Lord.  At the northern worship centre of Shiloh, there was a moral mess.  Chapter 3 begins with an understatement: “the word of the Lord was rare in those days; visions were not widespread” (1 Samuel 3:1).  And Eli, the high priest, who is described as an individual “whose eyesight had begun to grow dim so that he could not see, was lying down” (verse 2).  The inference is that we are not just speaking of physical sight here; his ability to discern and judge and guide what is going on is faltering.  He’s lying down on the job literally and metaphorically.

We know this because the previous chapter details the state of affairs.  Eli has brought his two sons into the temple and delegated them authority as priests.  But they aren’t worthily following in the family business.  Hophni and Phineas steal the offerings, bully the pilgrims, and exploit and rape the temple servants.  They bring dishonour to their vocation, their father, and their God.  Eli has been helpless to control these domestic terrorists.  He can’t seem to exercise any moral or legal authority over them.  Instead, despite the complaints of some of the people, he has turned a blind eye to their actions and even made excuses for them.  Doesn’t that sound familiar?

And yet, in spite of imminent collapse of this spiritual, legal, and cultural centre, “the lamp of God had not yet gone out” (verse 3).  That sanctuary flame was lit every evening and burned as a sign of the Lord’s presence until the morning came again.  Every church, even today, has a sanctuary light, which is sometimes called the lamp of the Presence.  One of my former churches was St. Timothy’s, in Burnaby.  It had a kerosene lamp in a red glass enclosure that was suspended over the altar with brass chains.  Every two weeks it had to be lowered carefully down and refilled by a special guild in the parish nicknamed “the Lamplighters”.   One winter, we had a terrible storm in the Lower Mainland.  The power went out.  In most buildings, this would not be an urgent problem.  But St. Timothy’s is built on a very high water table and has two sump pumps in the basement to keep the building from flooding.  So when the rains came down and the lights died, the pumps also stopped operating.  The alarm company phoned at 3 am with the news that a high water alert signal had been received, and that the church was in imminent danger of flooding.  The parish phone tree was activated and parishioners scrambled out of bed to come to the church with buckets.   We knew we had to bail the pit until an emergency generator was started and a hose could be hooked up to a mobile pumping unit.  As I lived nearby, I was first to the building.  I fumbled with my flashlight to unlock the front door, and then entered the darkened structure.  It was loud with the wind and the rain and the shriek of the alarm.  As I made my way to the stairs, a faint red glow caught the corner of my eye.  In the worship area, the sanctuary lamp still cast its little glow.

I remember standing there in my pajamas and dripping coat and gumboots.  From my heart came the simple prayer: “Thank you, God, that you are still with us”.  And I went down those stairs expecting to hit water at the bottom, but miraculously the floor was still dry and we were in time to save the church from damage.  I have never taken a sanctuary light for granted again.  (and when the old oil lamp started dripping in later years, the parish upgraded to an electric version that was hardwired to the new gas generator for the church.  Just in case.). In Eli’s time, the light of faith and hope may have grown dim, but it did not go out.  In spite of the spiritual darkness and the corruption that threatened to flood the system, he still had a role to play.  Eli was culpable for not being able to exercise authority over his sons, but he still had a role to play.  He was not entirely helpless, and when he realized what he could do, he acted on it.

The first part of the story has to do with Samuel, and how he listened to the voice of the Lord as it came to him in the quiet of the temple.  At first, there is the comic confusion of who is speaking.  Samuel thinks it is Eli calling for him because the voice sounds familiar and knows his name.  And Eli doesn’t clue in to the possibility that the Lord could be speaking to the boy.  After all, it has been a while since the Lord spoke to him!  But the tale shifts when the high priest begins to understand what is going on.  Although he is the one with the status and the training and the authority, God is choosing to speak to someone else.  And this is the point in the narrative when Eli renews his faith.  The word of the Lord is coming through Samuel, not him, and Eli needs to be ready to listen too!  This second part is about Eli having the courage to hear and act.

For Eli, that leads from comfort to discomfort to growth.  He has to face the truth.  “What was it he told you?  Do not hide it from me” (verse 17).  Then he has to admit what he is willing to do about it.  He accepts the consequences of the curse that is falling upon his sons and his family:  “It is the Lord, let him do what seems good to him” (verse 18). But obedience doesn’t mean just being nice.  It demands his part in changing the religious and political system of his day, including who he is going to raise up to help people hear God’s voice.  Instead of his untrustworthy family, Eli points the people to Samuel as a trustworthy prophet.  He uses his privilege and position to ensure Samuel is heard from the temple at Shiloh to all of Israel.

Eli may have been tired and dispirited by everything that was happening around him, but the grace of God shone through him.  He was able to minister, not through his own authority and privilege, but by sharing that power with another who carried the message of the Lord.  It is an illustration of how we too can open up space for voices other than our own to be heard in community.  I have just started a course with some colleagues called “Bridging Differences, Building Community” which is exploring white privilege and racism.  One of my early learnings is that it is not enough to be nice, or to consider myself an ally with those who are against racist behaviour.  I need to understand how I participate in or condone systems that privilege white people over other groups by listening to the stories of those outside of my experience.  I can use what influence I have to include them at the table of dialogue, rather than trying to speak for them.  And then I need to find concrete ways to work with them to oppose and dismantle the systems that give preference to some over others.

The good news is that when we feel old and tired to continue this work, God sends us fresh voices.  The task of a community is to keep listening to each other and also to those outside our own circle of culture and language and education and status.  Faith calls us to say, “Here I am.  Speak, Lord, for your servant is listening” (verse 9).  Faith also calls us to act on what we hear, even if it makes us uncomfortable.  Amen.