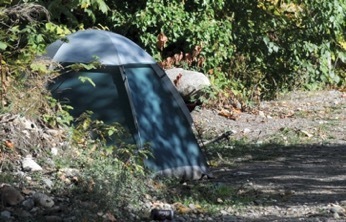 Our Bible readings today remind us of strange good news.  God is not homeless, but God is houseless.  There is a difference.  In this time of dislocation and separation, I believe it is a very important message for us to hear.

Finding home is not only about place but about welcome.  I have a friend who had recently moved to this country.  Although he had found a place to rent, his life circumstances changed to the point where he could no longer afford to stay there.  He put his few furnishings in storage temporarily while he looked for somewhere less expensive.  After a couple of weeks when he was staying with friends, I lost track of him.  I only found out later that he had slept in his car, and then spent nights camping in the commercial storage unit.  The shame of admitting homelessness combined with the fear of outstaying a guest’s welcome meant that he had hidden the extent of his struggle to make a new life in Canada.  Slowly his faith and his community helped show a way forward.  God sustains him as he faces the challenges of maintaining connections.  It has not been easy, but it has brought him closer to the heart of a God who does not need a house in order to make a home with us.

Some of us may not have had as personal an experience of homelessness.  But we all have felt the uncertainty of being out of place.  Maybe even sought it out.  When we go on vacation, we are purposefully putting ourselves in a situation where there are unknown variables:  where will we eat?  Where will we sleep?  Will there be a safe room for us at the destination?  In the process, we learn more about ourselves and our connections to God and creation.  Camping before the process of reservations was an anxiety-provoking exercise for me.  Even as a child, I could feel the tension mount as we drove our loaded car into the national or provincial park.  Would the dreaded sign “campground full” be posted at the gate?  Sometimes we’d drive round in loops, hoping for an empty site.  Occasionally, we’d be directly to the overflow lot, usually a gravel or grass field where we’d spent the night with other latecomers before lining up in the morning for a coveted spot.  Other times, we would have to drive on until we came across a less desirable private campground, with crowded facilities and noisy neighbours, pitching our tent in the dark.

The people of Israel had lots of practice pitching their tents in the dark.  Forty years practice.  They knew a lot about homelessness and uncertainty, and by the time they reached the Promised Land, they were heartily sick of the experience.  Now they could settle down for good and have a capital city in Jerusalem, with a palace for their king and a temple for their God.  So under king David a great house was built, with cedars of Lebanon and gold from the east and beautiful tapestries woven with gold and purple.  But now King David is feeling guilty.  He has a house and God doesn’t.  As far as he understands, the glory of the Lord of hosts is still residing in the box called the ark of the covenant, which the Israelites have been carrying around with them like a shopping cart.  It’s time to do better than to put up a tent each night to shelter it.  God needs a house to live in, right?

At least King David has the sense to consult the prophet Nathan.  And Nathan, who initially thinks a temple is a good idea, gets put straight in a vision.  God is clear:  I don’t need a house.  I have a home with the people of Israel.   “I have been with you wherever you went” (2 Samuel 7:9).  The promise is for God to continue to be with the Jewish people.  God is not ready to get boxed up in a building.  Instead Nathan tells David about what is to come: “Moreover the Lord declares to you that the Lord will make you a house” (vs. 11).  Wait a minute- David already has a very nice palace!  But the Lord’s idea of house is not bricks and mortar.  It is flesh and blood.  David will be the beginning of a line of rulers we refer to even now as the House of David.

God’s big idea is to come and pitch His tent with us in a new way: in a person.  The beginning of the gospel of John, which we read on Christmas morning, declares this:  “The Word was made flesh and dwelt among us, full of grace and truth.”  The literal meaning of ‘dwelt’ is the same as for pitching a tent.  But instead of the ark of the covenant being the sign of God’s glory, we get Jesus.  All God needed was someone who would make room, make space, for the incarnation.  God found a home in Mary.

Mary wasn’t just a surrogate mother for God.  She wasn’t a storage unit for nine months before turning out a ready-made deity into the world. One of her titles is Theotokis- God bearer.  Her “yes” to the angelic messenger allowed God to come make a home with her.  Not just until birth, but a commitment to the one she would raise and call son for the rest of her life.  Every child needs a home where they are welcome, not just a house.  Jesus received that love and care from his earthly mother and step-father.

That doesn’t mean that Jesus stayed home with his parents any more than God stayed in the Temple in Jerusalem.  As a wandering preacher, Jesus ranged far from his childhood town.   We don’t know where he slept, or where he found places to bathe or do laundry.  There were nights he spent rough in the wilderness, and days when he didn’t eat.  In this he shared the experience of his heavenly Father, who travelled with the people.  Rather than a wise man who sets up a retreat centre as a house of learning, Jesus finds his way into the homes of others to see if there is room for God’s word.  He also drew followers with him into the wilderness so that they too could be jolted out of the everyday.  Sometimes we have to leave our house to discover our home.

Most of us, I suspect, feel anxious about the thought of not having a play to stay.  Whether that is the fear of losing our what we have, of moving somewhere new, or of being unable to shelter those we love.  And none of us choose to be homeless.  There is nothing positive about living in fear, poverty, and isolation, of not having the respect of others or access to the basics of life.  I am not glorifying homelessness, and I believe we each have something we can do to alleviate the suffering of those who do not have safe housing.  What I am saying is that God understands what it is like to be on the outside of the house.  More importantly, God has chosen to be on the outside.  With the homeless, the immigrant, the refugee, the stranger far from those they love.  The only option open to God is to find a home with you.

Christians affirm that in Jesus God is with us.  I wonder what that means to you this year, as the world struggles with who can come into our homes?  Amen.