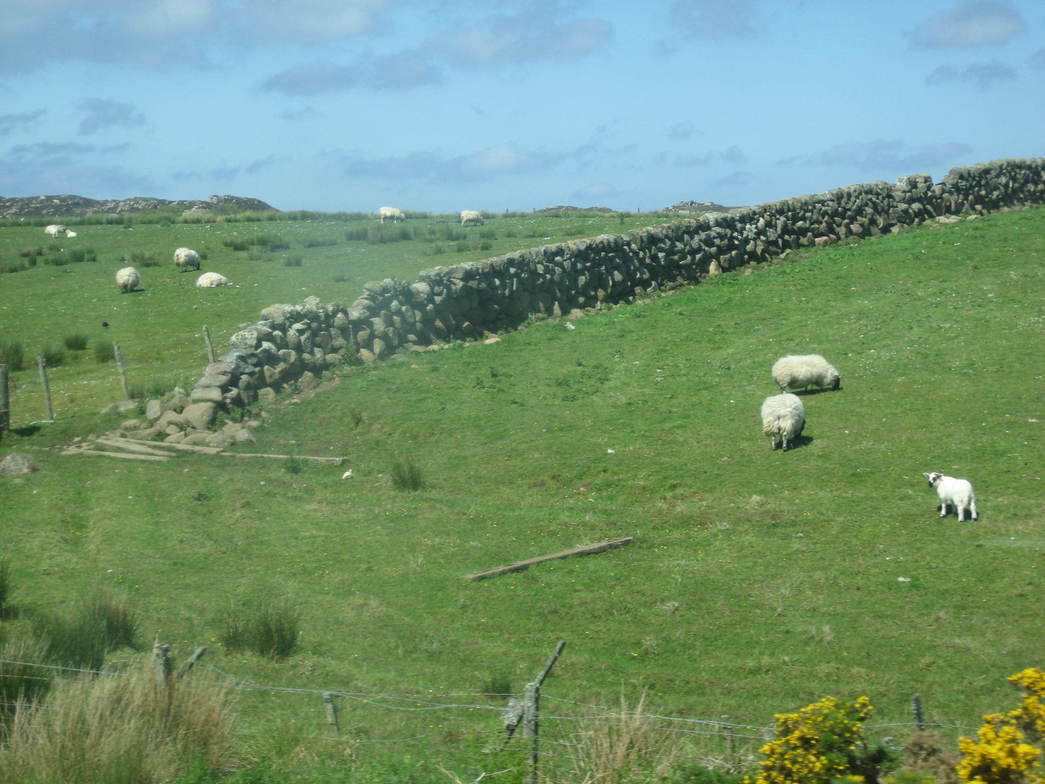 Let us pray:  Shepherd me, O Lord, beyond my wants, beyond my fears, from death into life.  Amen.

When my daughters were younger, one of our family entertainments was to watch episodes of “Veggietales” together.  These Bible messages, related by animated vegetables, still make me smile and think.  They have a sense of humour and solid theology.  One in particular comes to mind with today’s reading from John chapter 10.  In a silly song, a small boy is playing with his ball.  The ball bounces up and into a tree, then down over a high fence into the suburban enclave next door.  When the boy peers through the fence and asks for his ball back, the residents gather and break into song:

“Oh, the gated community is where we like to be,

Everything’s so lovely, oh our hearts are filled with glee,

What a lovely bunch we are in our gated unity!”

On they go with their golfing and barbequing and singing, while the ball rests on their manicured lawn.  It’s a poignant commentary about how we can retreat into our places of safety and ignore the needs of others outside the gate.

There are gated communities everywhere around the world.  Some are designed to protect foreign workers in areas of political unrest or conflict, or to segregate privileged minorities who feel themselves threatened by those less advantaged.  Many are purpose-built as residential neighbourhoods, not so much to prevent crime (someone can always climb over the wall!), but to provide a perception of security.  There may be a guard at the entrance or a gate that requires a passcode to open.  The checkpoint is both an early warning for strangers- “this is how you need to behave if you are let inside”, and a message of exclusivity- “don’t come in if we are not expecting you”.  This is not always a bad thing:  we are grateful for some protocols that are in place, such as not visiting a care facility if you are sick.  But when it gets taken to the extreme, it can lead to fear of the stranger: xenophobia.  Because we do not recognize the person or what their intent might be, we label them dangerous.  After the 2012 shooting death of Trayvon Martin in a gated community in Florida, one commentator described the tragedy as “like-minded residents who seek shelter from outsiders and whose physical exclusion then worsens paranoid group-think against those outsiders”.

A gate alone is not going to be enough to keep us safe inside or to keep danger out.  That is true whether we are thinking about a stranger at the reception desk, a virus that gets carried into our home, or a sheep in a fold.  Truly, it is how the community sees its role in relation to how the gate does its work.  And that brings us to the words of Jesus.

This Sunday is sometimes called Good Shepherd Sunday.  You have probably noticed that the readings all relate to sheep in some way.  But to confuse matters, Jesus starts off in John chapter 10 with another of the “I AM” sayings in which he identifies himself with the holy name of God and of God’s mission for the world.  He is describing the kingdom using images of sheepfolds and gatekeepers.  Now his first century audience included followers and peasants and merchants, but also the religious authorities of the Scribes and the Pharisees.  And it was the latter, most of all, who puzzled at what he was getting at.  Verse 6 says that “Jesus used this figure of speech with them, but they did not understand what he was saying to them.”  If the sheep are the people, who is Jesus calling a thief?  Is he accusing the religious authorities?  Who is he saying is the gatekeeper?  Is he claiming this role? The Jewish leaders thought of themselves as shepherds for the people of Israel, and this young radical rabbi as a thief.

Then Jesus says something really strange to our ears:  “I am the gate for the sheep.”  Did you think he was going to say, “I am the good shepherd”?  (He does, later on.)  Even though most of us were brought up far from a farm, we kind of understand that a shepherd is someone who looks after the sheep.  There are lots of pictures of Jesus with a shepherd’s crook surrounded by a flock, maybe carrying a little lamb in his arms.  We still get that Jesus is like a shepherd.  But a gate?  That’s a weird metaphor.

Actually, in biblical times, the gate to a sheepfold could be a person.  For most village communities, it made sense to pool resources.  Instead of everyone bringing their little herds into their homes for the night to keep them safe from predators, a big communal sheep-pen was guarded in turn by shepherds.  Every evening all the flocks were driven into a walled enclosure made from branches or stones.  Every morning everyone would go and get their own sheep or goats out and lead them to pasture.  Some of these enclosures had no gates to them, just an opening in the walls.  Instead of lugging big rocks across to seal the entrance, the shepherd designated for night duty stood at the opening.  He or she would prevent the animals from wandering out of the sheepfold and stay alert for anything or anyone trying to steal the livestock.  So the “gate” was the security guard, the bouncer, the concierge: the one who decided who to let in or out.

When Jesus is telling us that he is the gate for the sheep, he is saying that he is the one who has the authority to let anyone he wants into God’s kingdom.  And he has the compassion and the power to lead anyone he wants out of their confined space in order to find green pastures- that abundant life he is talking about.  The sheep don’t vote on who gets to share their pen.  They aren’t in a position to kick anyone out.  And they can’t hide all day in the sheepfold or they won’t get fed or watered.  They have to trust the voice of their shepherd who calls them out through the gate to forage on the hillsides.  God’s son is claiming this is what he will do, if people will trust his word of life.

I was listening to a CBC radio interview of a case worker in the downtown East side of Vancouver.  One of the greatest concerns for those on the margins right now is the threat of the Covid-19 virus spreading amongst those who do not have secure housing.  There is a plan to end the homeless encampment in Oppenheimer Park and to bring individuals into hotels or adapted community centres with ongoing supports for mental health, addictions, and issues of poverty, trauma, and other chronic illness.  But there are individuals who are suspicious of strangers coming into their midst with promises of assistance.  Many have previously had very negative experiences with authorities.  The hope is that some of the community workers have built up sufficient trust through one-on-one interactions that they will be heard as bearers of good news.  They can lead if they have the trust of those in need.  It is not just a matter of persuasion, however.  It will take ongoing effort to help with the transition, because any transition is anxiety-laden, even those that lead to more abundant life.  And for the wider community, there is still fear of the stranger coming into our midst.  What will we need to adjust in our interactions and expectations to accommodate a larger flock in care?

Sometimes the Church feels like a gated community in the wrong sense.  We have a tendency to act as though people need to be holy and perfect and just like us in order to join.  The truth is that none of us are holy, or perfect, or just like each other.  If we put up false fronts that we are doing just fine, we only reinforce the stereotype of religion as a bunch of hypocrites.  Instead, I feel the way to abundant life is to be authentic with each other, accepting each other’s shortcomings and struggles as being part of community. This leaves the way more open for others to trust that they can be loved and accepted as they are.  If we remember that Jesus Christ is the gate, we can live into his promise that “whoever enters by me will be saved, and will come in and go out and find pasture… I came that [you] might have life, and have it abundantly.” (John 10:9-10)  This is the gated community that I want to belong to.  This is the way I want to share it with others.  This is the way I will not keep to myself.  Amen.