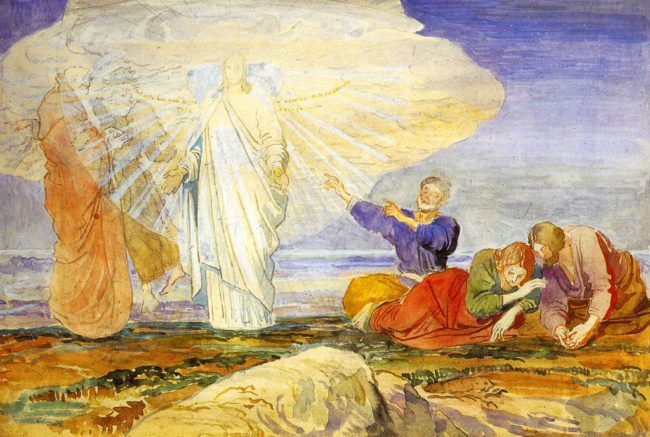 Now about eight days after these sayings Jesus took with him Peter and John and James, and went up on the mountain to pray. And while he was praying, the appearance of his face changed, and his clothes became dazzling white. Suddenly they saw two men, Moses and Elijah, talking to him. They appeared in glory and were speaking of his departure, which he was about to accomplish at Jerusalem.

Now Peter and his companions were weighed down with sleep; but since they had stayed awake, they saw his glory and the two men who stood with him. Just as they were leaving him, Peter said to Jesus, “Master, it is good for us to be here; let us make three dwellings, one for you, one for Moses, and one for Elijah”—not knowing what he said. While he was saying this, a cloud came and overshadowed them; and they were terrified as they entered the cloud. Then from the cloud came a voice that said, “This is my Son, my Chosen; listen to him!” When the voice had spoken, Jesus was found alone. And they kept silent and in those days told no one any of the things they had seen.

A war has broken out in the Ukraine, with frightening parallels to events that occurred not so very long ago in Europe.  We see images of young mothers huddled in concrete bomb shelters with their infants in their arms, worry all over their faces.

We have already developed international systems of law to ensure an end to such callous mis-adventures by the power hungry.  We have already written rules for war that explicitly protect innocents.  We worked so hard to avoid the risk of total war and nuclear annihilation.  We were supposed to have fixed this by now.  What the hell is wrong with us?!?  We live in a world where innocents must huddle in concrete bunkers with the hope that they won’t be torn to pieces at any second.  The immaturity and negligence and cruelty of humankind knows no bounds!

So how jarring is it this week to find Jesus on a mountaintop in all his glory, beside Moses and Elijah, heroes of the Old Testament, speaking with them in veiled terms, seemingly removed from all human reality.  There we see he is worshipped by his disciples in his radiance and power and glory.  This very week, when the bombs dropped on people who have no power, we find Jesus in all his power on a mountaintop, seemingly so very far away from the bunkers of the world.  What is going on?

We all experience a time when we look up to God on the mountaintop, or God in heaven, and feel God’s distance, and wonder ‘where is God in all of this?’  If God’s so great, and so real, and if the Good News was so good, then how is it that bombs rain down on mothers and their children?  And for that matter, on soldiers trapped like pawns in their own level places?

We too sometimes feel like we’re under attack, and that God is nowhere to be found.  Like when we receive a difficult medical diagnosis.  Or when a loved one dies.  Or like when we lose our employment or our purpose.   Or, in the case of the Parish of St. Martin’s, the future of a beloved Christian community, which so many have worked to build up, seems so close to an ending no one wanted.  These are painful experiences.  They are experiences of death that we would wish on no person.

It’s pretty easy to encounter God at the mountaintop experiences.  But sometimes if feels like God is present only in our mountaintop experiences.  On sunny days, when things are good, when we have so much to be grateful for.  But in the hard times, in our bunkers and level places, it can feel as though God is absent, or waiting somewhere else on a distant mountaintop.  Sometimes it feels like the Good News was whispered in a far off land, distant in time.

Maybe you’re like me.  Sometimes when I read these more fantastical, magical stories about Jesus, I am lulled to sleep like the disciples around Jesus this morning.  Because it seems to have so little to do with us.  It seems to be just about the spectacle.  But sleepy disciples, such as myself, can miss the whole point if we aren’t really listening.

Let’s go back to the mountaintop and pay a bit closer attention.  There’s the obvious stuff.  Jesus appears in the company of heaven and to his disciples in striking illumination, which of course communicates with the brightest of highlighters, in case we miss it, that Jesus is the divine, transcendant, the eternal Son of God.  Which is more than just saying one particular human being was God’s favourite human being – which can feel alienating.  It’s saying, with that super bright highlighter, that the way Jesus is being a human is the way we are all called to be human.

Hey.  If we’re all a little depressed about the immaturity and depraved nature of our humanity, wake up!  Jesus is doing something about it!

Back on the mountaintop we also see Moses and Elijah.  Which seems a little like one of those silly Marvel movies where mutliple comic book heroes come together for a buddy movie while saving the world.  Marvel movies make me feel like a sleepy, like the disciples around Jesus.  I always think, when I see superhero movies, well these fit superheroes look great together, but what does this have to do with us, and with reality?  But Jesus appearing with Moses and Elijah is not like a Marvel movie.  This is poetry.  Moses is not just a hero of the Bible, he was a man who led his people out of slavery, and through an exodus journey which many of his followers rejected.  He brought to his people covenantal commandments – essentially instructions on how to behave like mature human beings.  Instructions that stressed that God is about justice and fairness in the world.  Instructions that indicate that God really cares about how we treat each other.

And there’s Elijah. Who famously challenged oppressive authority at great personal risk. A man who resembles a Black Lives Matter protestor more than he does Iron Man.

If Jesus appears alongside these prophets, maybe Jesus is also showing us how to behave like mature human beings.  Maybe Jesus will also challenge oppressive authrotity at great personal risk.

Hey.  If we’re all a little depressed about the injustice and unfairness of the world, and the acts of oppressive authorities, wake up!  Jesus is doing something about it!

Back to the mountaintop.  After the disciples are roused from their sleepiness and see who Jesus is hanging out with, they want to basque in the glory of their Messiah.  And they propose that they remain on the mountaintop to make dwellings for Jesus and Moses and Elijah.  It seems that the disciples literally want to domesticate these advocates and activists for God’s kingdom, by asking them to stay home.  The disciples seem to want to make them idols of worship, far removed from human business and politics down in the level places.  It might sound funny saying that at St. Martin’s, which is a church dwelling on a mountaintop where we worship Jesus Christ.  But the point is that the church that Jesus founded is a movement.  It is not a place.  It is not an institution.  It is a movement that challenges injustice and insists on love.  For everyone.  Always.

When God tells the disciples to listen to Jesus, she is saying that the disciples have to move off the mountaintop, and move with Jesus, toward the cross.  They can’t just worship Jesus, they have to enact the way of Jesus in their own lives.

Finally, when all of our own human agency and action seems to fail, that’s when we are really put to the test.  What the transfiguration and the death and resurrection of Jesus Christ is showing us is that we can trust that there is new life even when death seems to have conqured all.  Whether it’s in war.  Or in disease.  Or in our personal human failings.  Jesus is insisting that God’s love and life have the final word.  I think our homework during lent is to find all the ways that this is true.  To find all the ways there is light in darkness.  To find all the ways there is life after death.  I hope you can share it with me too, because in this dark time, I also hope to see signs of new life in Christ.

The only example I have today, other than this glow stick from our children’s talk this morning, of how this Christ process works is in the breaking of the bread.  When we hold the bread up and it’s whole and has yet to be broken, it can’t feed us all.  Somehow, when Jesus’s life is broken, we’re all fed.  When we consume the bread of communion today we must remember that this is a sign of how life works in dark times.  And when we are fed, we are called to go out into the world to be a light for the world.