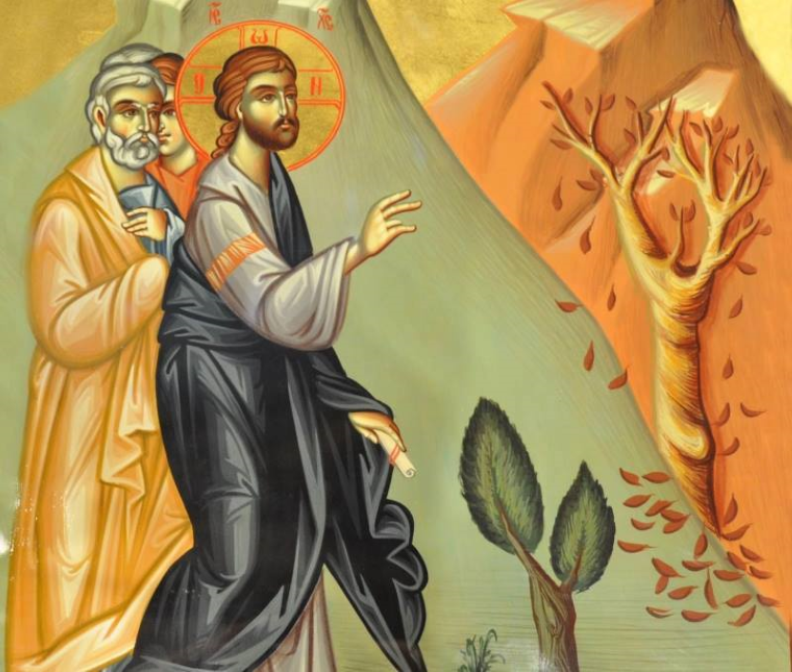 Then he told this parable: “A man had a fig tree planted in his vineyard; and he came looking for fruit on it and found none. So he said to the gardener, ‘See here! For three years I have come looking for fruit on this fig tree, and still I find none. Cut it down! Why should it be wasting the soil?’ He replied, ‘Sir, let it alone for one more year, until I dig around it and put manure on it. If it bears fruit next year, well and good; but if not, you can cut it down.’”

It’s been a bloody two weeks since my last sermon, and the bloody news won’t stop. The thing that’s finally got me to stop reading the news for a little while is the bombing of that theatre in the Ukraine that was being used to house children. In front of that theatre were painted in giant white letters the word “children,” written in the language of the aggressor, so that the tyrant might have mercy. A word probably written by desperate parents who hid their children there in the hopes that they and their children might escape an excrutiating awful ending. And there, in the bloody news, is the theatre, destroyed. It’s roof was targetted by the tyrant’s bombs. It’s roof collapsed on hundreds, perhaps thousands of vulnerable people. And the tyrant didn’t care. In fact, he was at a parade celebrating his actions. Where he said that anyone who protests his actions are scum and traitors. We will simply spit them out like a gnat that accidentally flew into our mouths.

The pain of it all is almost too much to bear. Where’s the fairness in that? Where’s God in that? What did those children, and their poor parents, do to deserve that? How is it that Putin is getting away with this?

It's been a bloody 2 millenia, and the bloody news won’t stop. 2000 years ago, a tower next to the pool of Siloam, the place where pilgrims washed to cleanse themselves before entering the temple to encounter the Divine on earth, there, a tower fell onto the heads of 18 people. And in that same temple, where only sacred and beautiful things ought to have occurred, where Jews were making their passover sacrifices with hearts filled with gratitude, there, where God is supposed to reside, there, Herod took the lives of a group of Galileans in his hands, and squeezed them until their blood flowed with the blood of animals.

The crowd that are following Jesus say to him “Where’s the fairness in that? Where’s God in all of this? What did these people do to deserve that?”

Most of us have had a calamity in our own lives at one time or another. Something that was excruciating and seemed to have no logic. Think for a quick second about what that calamity felt like for you. What it felt like to have no escape from something awful in your life. Did you ask that same question “What did I do to deserve this?” And did you survey your life and wonder what you did wrong and what you could have done better. Did you scrutinize your behavior, your relationships, your diet, your beliefs, your values, your choices, your actions. Hunting for some cause to explain the effect, in hopes that you could change what you were doing and therefore maybe stop whatever had gone wrong. “Maybe I did deserve it. Maybe I’ve been awful. Maybe I haven’t been good enough. And this is what I get.”
Maybe you lifted up your calamity, or the calamity faced by others, and you asked God to make sense of it. This is what the crowd does to Jesus. They want an explanation from Jesus that brings them some sense of safety and security. An answer that gives them control over the chaos. Some plan to escape the same fate. Something that gives them an emotional and moral distance from that which they fear the most.

In reply Jesus says, “do you think there is any fairness in this? That somehow those that have perished somehow deserved it? That there is some plan at work here? No, I tell you; but unless you repent, unless you transform yourselves, you will all perish as they did.”

To hear it correctly, imagine again that we asking Jesus how it’s fair that Putin dropped a bomb on top of, and into, a theatre sheltering hundreds of little children. And Jesus replies to us “Unless you repent, you will perish just like them.”
Now what kind of an answer is that?

As is so often the case, Jesus is not answering our question, because we’re asking the wrong question. We’re looking for some easy answer to human evil and suffering. Some platitude that comforts us, but isn’t true. We hope there’s some divine power that’s going to rescue people at the last second, or mete out divine punishment when the time comes. When the truth is that little children really are obliterated in human wars. And that tyrants really do get to sail into the sunset on their super yachts. There really is darkness in the world. But it seems we have more interest in examinging consequences - and seeking solutions – and getting control of things – and avoiding inevitable things and hoping that God will deal with the state of th world, we have more interest in those things than we do in the truth.

‘And here’s the truth,’ Jesus says. ‘The answer to the question you didn’t ask. You, dear human, are as vulnerable as a child in a stadium being bombed in the Ukraine. You dear human, don’t know there’s a stone tower about to collapse on your head. You, dear dear human, are like a fig tree with no way to protect yourself. You, dear human, are as close to death as you ever were. And there’s nothing you can do about it. No amount of good deeds or good character are going to save you. And no amount of evil deeds will hasten death for others. I know that is supremely uncomfortable knowledge, dear human. I know that this knowledge causes in you fear and maybe some anger and even some outrage about the unfairness of it all. But that’s what I want you to feel. You see,’ he seems to say, ‘it is not a bad thing for you to feel the full fragility of your life. It is not a bad thing for you to count your breaths in the dark…. not if it leads you to repent. Not if it means, in the short time you have remaining, that you become the light in the darkness.

Jesus is interested in repentance, and so is the season of Lent. Unfortuantely, we do use the word “repentance” in English, which is just a truly terrible translation of the word used by Luke here, which is metanoia. Repentance in English suggests you focus on sadness and shame about past things you’ve done in the past. And so we often imagine Lent as a time where we beat ourselves up. We imagine that Jesus wants us to whip ourselves as he was whipped. That Lent is supposed to be a time of self-flagellation for our sins, and a deprivation or self-punishment meant to correct our evil ways. But the Greek word that Luke uses in this Gospel passage, that metanoia word, that transformation word, it says something different. Metanoia transformation – denotes a radical change of character, a change in your mind and in your heart and in your life and in your actions. This metanoia transformation includes the same self-assessment as the word repentance suggests – the kind that makes us look at oursevles truthfully in ways that might make us cringe a little – but metanoia moves us father forward than a simple inwardly-focused and sometimes self-centred judgement against oneself and one’s past. Metanoia transformation moves us from a repentant focus on our own failure in the past to something much grander in the future. It moves the spotlight, (or the flashmlight), from focus on our own inward and private sins, and turns it into a searchlight to see what we might need to get the job done, like a firefighter might use to look for the right equipment in the dark. We move from what we lack to what we need in order to transform into what’s needed in the world: our truest selves. And when we recognize how good we are and how profoundly good and life-giving our calling is, then we take that searchlight and shine its beam outward in ways that are experienced by others as life-giving sunlight that is Good News for the world.

Of course, the firefighter is trained to be a firefighter. They train. And train. And train. So they can be exactly who they are called to be when the time comes. The Good News is that someone is training you in exactly who you have to be in the darkness. There is a gardener in the vineyard. And he sees you are. And he sees who you are supposed to be. Which is a fig tree that bares fruit for everyone around you. And being the kind of gardner he is, he nourishes you with love and attention. He reminds you of all that you have been given. That you have a breath to breathe. You have food to eat. That you get to bask in the sunshine times of life. That there IS sunshine after long nights, there IS spring after a long winter. You, dear fig tree are being trained. And trained. And trained. By THE Gardener. You are being taught what love looks like. What transformation looks like. That you were born to give. You were born to give of yourself. That you are like the fig tree that gives fruit.

We can all look at the disasters befalling the world, or our communities, or our churches, and ourselves, and stand there dumbfounded by the senselessness of it all. We can ask stupid questions when we see the burning building, like “why is the building on fire? Why didn’t they replace the batteries in their fire detector? Who’s responsible for this mess? Who’s at fault?!” OR you could do what you were born to do. Which is to turn on your light and to be Good News for the world.