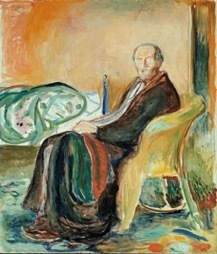 A little group of Christians like us is encouraged to look for the light in the midst of dark days.  In our second reading this morning (1 Thessalonians 5:8-9), the writer says “Since we belong to the day, let us be sober, and put on the breastplate of faith and love, and for a helmet the hope of salvation.  For God has destined us not for wrath but for obtaining salvation through our Lord Jesus Christ”.  These words, originally meant for other people who were struggling and anxious over the future, are just as important to hear today.   Really, they can be seen as the core of the gospel message that this faith community has tried to live out over the last hundred and ten years.  St. Martin, then and now, is a guide for us as we follow a path of sacrificial living through these scripture verses.  In our risk and choices, even in our losses and grief, we find love and faith in God and the hope of salvation.

Let’s begin with our patron saint, Martin.  The most famous story is about him sharing half of his cloak with a beggar.  It is the one celebrated in pictures and stained-glass windows.  But there are other examples of him modeling his life on the sacrifice of his Lord.  Martin was converted to Christianity at the age of 10, although his family was opposed to his association with the Church.  Martin was an army brat, son of a pensioned officer in the Roman army.  As a result, he was conscripted to serve in a cavalry regiment in Gaul- modern day France.  He struggled to reconcile his faith with his occupation as a soldier.  When Julian became emperor and he was assigned as part of the imperial guard, Martin realized that this ruler’s behaviour was anti-Christ.  Payday came around and Martin refused to accept his wages.  “I am a soldier of Christ; it is no longer lawful for me to fight” he told his superiors.  He was charged with cowardice.  In response, he offered to lead the troops into the next battle unarmed.  Miraculously, before the army could take him up on this offer, the opposing force sued for peace and the battle was averted.  Martin then left the military and became a monk, and later the bishop of Tours in France.  He literally gave up the protection of his career and its equipment- his sword, and breastplate, and Roman helmet- to put on the armour of Christ and work for peace.  His good fight against the darkness that oppresses the hearts and souls of people, inspired many.  He is the patron saint of soldiers, beggars, wool-weavers and tailors, geese, vintners and innkeepers, France, and this Anglican church.

There is a story of how this St. Martin’s got its name.  In 1910, the parish of St. John the Evangelist down near Burrard inlet began a mission church in the rural settlement that is now the Upper Lonsdale area.  A building on the corner of Queens and Lonsdale was named St. Thomas.  In a few years, the community grew enough to both extend the existing meeting place and to purchase land to build a parish hall.  Then World War I broke out in 1914, and many of the young people went away to serve.  There were many reasons:  some went out of adventure, some for the job and experience, others for love of country and fear for loved ones as a result of the European conflict.  Many did not return alive.  Those who survived were wounded physically and emotionally.  The influenza epidemic followed the war home.  St. Martin’s struggled to tend to the ill and the grieving, even getting fined by the civil authorities for trying to keep the doors open.  In the midst of all this, the people of the church made an important decision.  They rededicated the parish as St. Martin, both in honour of those who had sacrificed their lives in the first World War and in recognition of their call as Christians to live sacrificially.  It was not just a celebration of the world turning from war to peace, or a commemoration of the names on the honour rolls on our walls.  The mission went on to become a full parish, with a new home at the present site, and a new dedication to rebuilding a society of love and faith in God.

Through the years, St. Martin’s has experienced other dark times.  The Depression, the Second World War, financial recessions, societal shifts, and theological differences that have broken and grieved us.  We are in another period of painful separation and uncertainty that is testing us as followers of Christ in the way of St. Martin.  We have all made sacrifices.  Some large, some small.  Part of our purpose as a faith community is to shine a light on what is happening today.

So today we lift up all those who have given up much of themselves for others.

In recent months, the public has grown weary of cheering on all our health care professionals.  Yet they continue to serve beyond what they are compensated for in hours and protection.   From the workers at care home to the nurses and aides and administrators struggling to manage supply chains and case numbers, these are sacrificial givers in the spirit of Christ, and we must continue to pray for them.  Consider also the families and the caregivers of our ill and elderly and vulnerable: for their anxieties and frustrations and sleepless nights as they watch and minister.  This too is faith and love in action.  We grieve with all those who have had a loved one die, especially for families who were prevented from being at bedsides or are unable to mourn and commemorate them in the ways they would have liked.  This too is a sacrifice while we hope for a day when we can gather again to comfort and console each other.  And there are many others who need our prayers:  the unemployed, the unhoused, the hungry, the businesses afraid of going under and the individuals who are isolated and depressed.  In recognizing their struggles, we are called in two ways to respond.

The first is to commit to praying for the struggles of others.  But not just a listing of needs that results in us getting depressed too about the state of the world.  We can pray in the spirit of the hope for salvation.  We can imagine the light of Christ surrounding and illuminating those whom we pray for- a healing and empowering light that is able to overcome the darkness as we look to the time when all will be made well.

The second way we are called to respond is to live more deeply into the sacrifice of Christ, who shared himself that we might have life.  Every time the bread is broken and the wine is poured at the altar, the truth of God’s power is proclaimed again.  We don’t have to be physically present to receive and understand God’s love through this act.  But we continue to do so, as we do this morning, as a reaffirmation that the sacrifice that Jesus made in his own offering is sufficient for healing all the brokenness of our hearts and our world.  Eucharist is an act of defiance against the darkness that surrounds us.  It is an expression of love and faith when we could so easily falter in our belief in the light.

There are many things we have given up to help each other get through this difficult time.  Let us do as the writer says: “Encourage one another, and build up each other, as indeed you are doing” (1 Thessalonians 5:11).  We don’t know what the future may bring, let alone next week.  But we can be ready to sacrifice what is necessary like Martin, and put on the personal protective equipment of the gospel instead.  Amen.