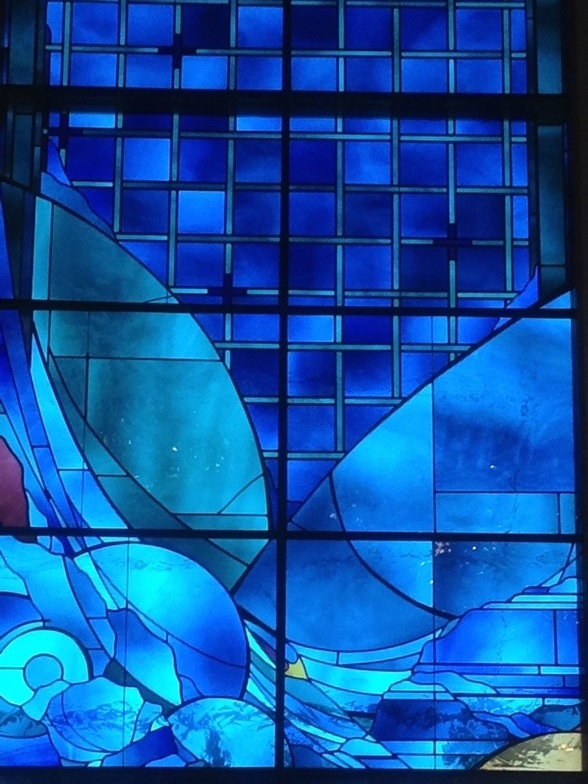 I speak to you in the name of the one true and living God who calls to us across the waters and challenges us to trust in his power to love and forgive.  Amen.

Some years ago I was chaplain for a teens’ sailing camp.  Our first leg was to take the boats from Gambier across the Salish Sea to Newcastle Island near Nanaimo.  Although the captains and crew were experienced sailors, many of us were not.  The wind was against us and the waves (to my eyes) were large.  Although some passengers were getting queasy, others were hungry, so I volunteered to go below and get lunch.  After all, I had never been seasick a day in my life.  Standing in the narrow galley, I braced myself between the cabinets but still got slammed from side to side (I found the bruises later).  As many others have found out, being below decks away from the fresh air was a lot harder on my stomach than I had imagined.  By the time I struggled back up with food for the others, I was not in any mood to eat it.  “Sit for a minute and look at the horizon”, the captain counselled.  But I was set on helping share out the meal to the others.  I should have listened.  I ended up slumped on the deck near the rail for the rest of the voyage.  And I learned to keep my eyes on the horizon.

Wiser sailors than me probably would not have made the same mistake.  But when the storm is all around you, it’s hard to keep a focus.  Look at the disciples.  Most of them were experienced fishers.  They were used to taking small boats out on the Sea of Galilee.  They knew how to read the weather coming in across the hills and see from the wind and the clouds what was likely to happen in the next few hours.  But they were also still learning to trust and to obey Jesus.  When their leader tells them to get into the boat and go on ahead of him to the other side of the lake, they do so.  Maybe a couple of them muttered about the wind direction or the way the waves were starting to get choppy.  But they had their orders.  And after all, they didn’t get seasick!  What was a little wind and rain to the disciples of God?

All of this gets forgotten as the storm picks up on the open water.  Night falls, and all they can see are the crests of the waves crashing against their flimsy little craft.  By the early morning, they are exhausted and perhaps even scared for their lives.  This sea that they have fished and lived on for years has taken many into its watery graveyard.  When a figure is seen walking towards them over the water, their first thought is not of rescue.  They think Jesus is a ghost come to drag them under.

Jesus identifies himself and tells them not to be afraid.  But he does not get into the boat with them.  Instead, he waits on the surface of the water, with the wind and rain still blowing around them all.  It is Peter who challenges his Lord’s purpose.  “If it is you, command me to come to you on the water”.  And Jesus says, “Come”.  Now Peter knows, like any sane person, that humans can’t normally walk on water.  (Unless it is frozen, which is fun to remind people when you go skating or skiing).  But after all the other amazing things Peter has seen Jesus do, how hard could this be with the Lord’s help?  So he climbs out of the boat, not trusting in his own ability but in the one who has demonstrated the impossible is possible.

Dietrich Bonhoeffer (as quoted by Charles Cousar in Texts For Preaching, Year A, p. 441) says “Peter had to leave the ship and risk his life on the sea, in order to learn both his own weakness and the almighty power of his Lord.  If Peter had not taken the risk, he would never have learned the meaning of faith… The road to faith passes through obedience to the call of Jesus.  Unless a definitive step is demanded, the call vanishes in thin air, and if [people] imagine that they can follow Jesus without taking this step, they are deluding themselves like fanatics.”

Faith holds Peter up, as long as he keeps his attention fixed on Jesus.  But then he starts to get distracted.  The wind hasn’t stopped blowing.  The waves haven’t stopped crashing.  Obeying Jesus doesn’t make the rest of the world calm and peaceful around him.  If anything, the push and pull of the storm intensifies.  That little bit in him that wants to have faith in himself suddenly pipes up with “you can’t actually walk on water, stupid!”  And that other little bit that is reserving judgment on Jesus’ powers is wondering “can he really be doing this?”

He starts sinking like a stone.  No matter how good a swimmer he is, he’s not going to last long. But in the discovery that he can’t keep himself afloat, Peter cries out for help.  “Lord, save me!”  Peter has not only risked trusting the call of God, he has risked doubting it too.  And learned that God is standing by with a hand outstretched, if only he takes the step in faith.

There are rough waters around us.  What does it mean for each of us to keep our eyes on the horizon, on Jesus standing outside of our boat?  Can I trust that the call to risk comes with forgiveness for trying and failing?  Can I hope that, despite the storm of life, I can carry on walking, sometimes even on water, with God’s help?

A 2012 song from the group Fun called “Carry On” speaks to me of both the struggle and the hope of forgiveness for those who risk in faith:

You swore and said we are not shining stars.

This I know.  I never said we are.

you can never look back.

I was found and now I don’t roam these streets.

I am not the ghost you want of me.

If you’re lost and alone or you’re sinking like a stone:

May your past be the sound of your feet on the ground.

Carry on.  Carry on.

Bread of Heaven The Life of the Cross Love Listens