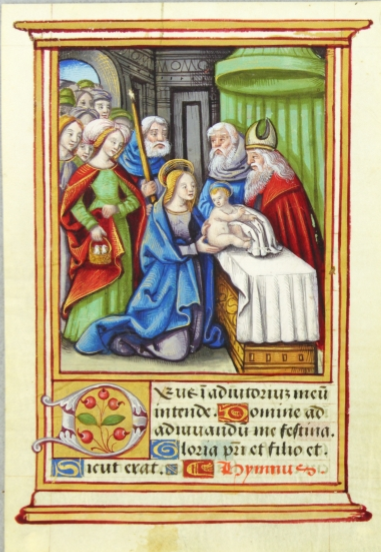 It is hard for us to imagine the Temple or, for us, the Church, forming the Centre of our lives. In Ancient Israel everything happened at the temple. The Temple was the Centre of religious and civic life. Sacrifices were offered. Markets happened and religious and civic rites of passage were performed, such as the case with Jesus today. In our world with pressures from work, fairying kids from one activity to the next, shopping, emailing, connecting online, offline, in-between lines it is hard to determine what, if anything, forms the centre of our lives. The days when the church formed the centre of our lives seem a distant memory. The days when we looked to the church for our rites of passage seems foreign. What does it look like for the church to mark significant moments on our lives? That was something that belonged a generation or two ago.

Over time, slowly but surely, our rites of passage as a church have eroded and their significance and meaning has been lost in the shuffle as other more exciting and new ventures take their place. Parents bring their children for baptism not because they want to raise their children in the faith, but because it is something that would, “make grandma happy” or at some level they have a sense that Baptism is just something you do when you are a baby; in the same way a parent takes their newborn for a check up at the doctors office. Couples come to church to get married, not because they believe in making a public commitment before God, friends and family, but rather because the church, “is so pretty with all those stained glass windows that will make for a great photograph.” Weddings seem to be more about the photo op and the party and less about love, commitment and living a life with shared values and beliefs.

It is small wonder that people find it hard to find relevance in the church or in their spiritual lives. As a church, it is hard to keep up and compete with all the other preoccupations and demands on our time and lives.

How are we prioritizing what is important in our lives? How do we mark the significant milestones in our lives? Life is about rhythm and balance. This is an ancient monastic teaching. Our days, and weeks need to be in balance. We cannot be on the go all the time bouncing from one activity to the next. We need to pause and rest. Even God rested on the 7th day. So why is it so hard for us to do this? Why do we put ourselves in a position where we lose focus on what really matters and should matter in our lives? How do we, as people and a church, reclaim the significance and meaning of our rites of passage? How does the church become more of our Centre and base from which all other activities find meaning and relevance in their rightful order?

Several years ago now, the Bishop of Olympia recalls a story of how the church was and dare I say, still is the centre of people’s lives. This was a mid size parish, deep in the Southern United States. People from all age groups, ethnicities and life experiences called the place home. One single mother and her children were devout church goers. They were the kind of people that always showed up on Sunday morning, regardless of what was happening with the weather, the world or in their own lives. In sickness and in health, they never missed a beat. They pitched in and helped with the church market and other parish events. The church in many ways was the heartbeat of their lives.

But then something happened. She missed a Sunday. At first no one flinched. Everyone can miss a Sunday. The second Sunday in a row missed, a couple of people began to wonder if something was wrong. The third Sunday missed; everyone new that there was a problem. It was so unlike this person to miss church without letting anyone know. It was as if she just vanished. Eventually the parishioner came to see the priest. She needed to talk.

She explained that the reason why she had stopped coming to church was that her son was convicted of a crime and sent to jail. She was so upset and ashamed of his actions and what the church community would think. She could not bring herself to come to church and face the questions, the looks, the anything else that people intentionally or unintentionally would send her way. So she withdrew and shut herself off from her community, her friends and her support.

After listening to this parishioner for some time, the priest got up from his desk and went to the filing cabinet. From there he retrieved the Baptismal Register. After flipping through several pages he eventually found the entry where she was baptized and then later where her son was baptized. The priest showed both entries to his parishioner explained that at their baptism they became members of a larger family, the church family. He went on to explain that she and her son were family and that her problems were their problems too. Her joys were the communities joys and her suffering was the church’s suffering too. He explained that she is not alone, never alone and that the church was here to help. Just as she had given so much of her life to the church, it was her turn to receive the ministry, blessing and grace of the church. With her permission the priest made a couple more phone calls.

Before long the whole church community was aware of the circumstances of this faithful parishioner and were eager to help one of their own. A group of parishioners got together and started writing letters to her son in jail. They explained that they were thinking of him and mom and that they were both in their prayers. They explained that mom is okay and being looked after. That all he needed to do was to focus on doing his time and the church would be there for him when he was released.

A couple of other parishioners took it upon themselves to take their friend and fellow parishioner out to lunch a couple of times and to check in on her. Make sure she was okay, not getting too depressed and always reassuring her of their love and support.

The parishioner came back to church, reengaged with a community that formed her base and rock for all her life. When her son was released he too reengaged with the church and his commitments. From that experience, a new ministry developed in the church. This parishioner and her son, along with others, continued to write letters to other inmates. They assured them of their prayers and support. That there were others, on the outside, who were thinking of them and who believed in them.

It is amazing what can happen when we remember to hold onto the thread of what is important in our lives. When we reclaim the church as our centre and the heartbeat of our lives, the spin off not only for us, but our community is unmeasurable. When we reclaim the meaning of our rites of passage, the energy and pay off for us and our community is limitless and has the power to form meaning and change lives again and again and again.