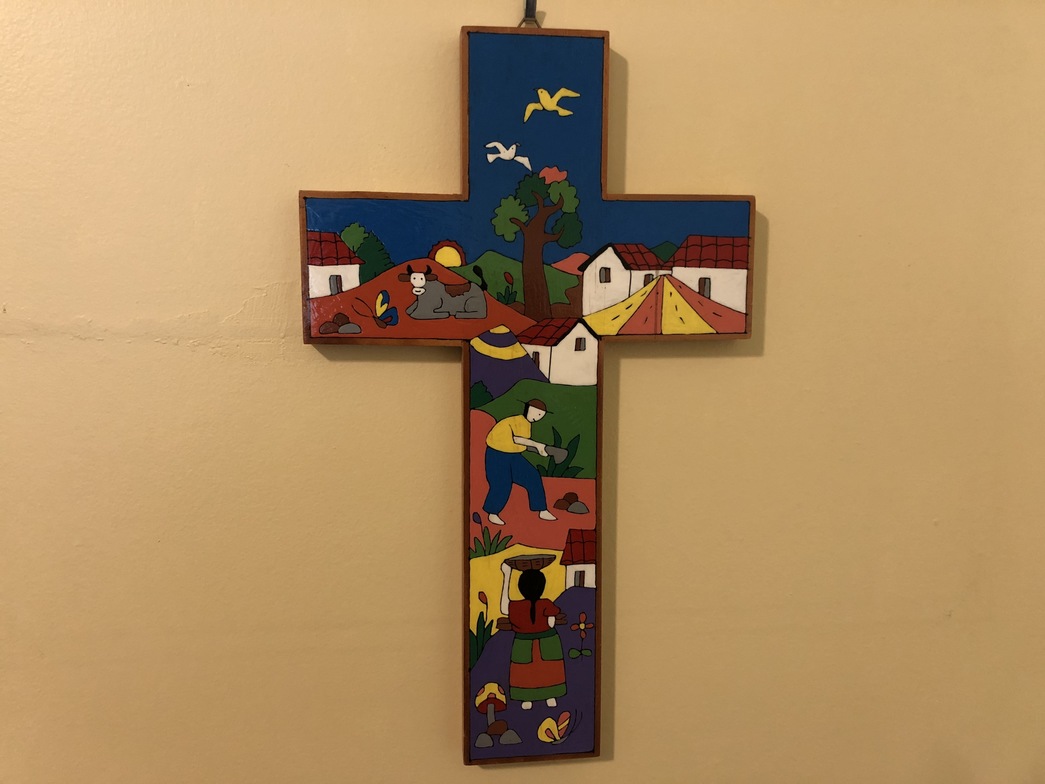 There’s a song that is circulating right now for a paper towel commercial.  “Human”, by Rag’n’Bones Man (2016) accompanies images of people making messes, big and small, in their lives.  The lament, in this context, is that bad things happen in life and the singer can’t be expected to fix it all.  He needs help cleaning them up.  Some of the words go:

Take a look in the mirror
And what do you see?
Do you see it clearer or are you deceived?
In what you believe?

Maybe you can identify with those feelings of depression and resentment, of struggling with your own burden, let alone trying to clean up someone else’s mess.

My grandmother had a teddy bear with a squint.  She called him “Gladly”.  As in: Gladly my cross-eyed bear.  Have you heard the phrase “we all have a cross to bear”?  The implication is we are to carry it cheerfully and without complaint.   Sometimes it is intended as a comfort, along with the reassurance that “God never gives us more than we can endure”.  Except that there are things that are too difficult to bear alone.  Physically, mentally, or spiritually.

“If anyone wants to be my disciple, let them take deny themselves and take up their cross and follow me.”  The first three gospels all contain these words of Jesus (Matthew 16:24; Mark 8:34; Luke 9:23).  When this commandment gets framed as an individual commitment or a personal piety, this becomes an impossible ask.  Even Jesus ended up needing help carrying his cross before the crucifixion.  A person in the crowd was forced by the Roman soldiers to take on the load after Jesus stumbled and fell under the weight of it all.

In John’s gospel, the emphasis is not my cross but our cross.  Not individual suffering, but the community’s sacrifices in love which lead to life.  Chapter 12, verse 26, has Jesus state: “Whoever serves me must follow me and where I am, there will my servants be also. Whoever serves me, the Father will honour.”  His mission is to submit to the cross in order that God may be glorified and those who believe in him may find resurrection.  He asks his disciples to join with him.

Jesus briefly considers whether to ask for rescue.  He is in Jerusalem for the Festival of the Passover.  At this holy time, the Jews commemorated the Exodus, when the eldest sons of the Egyptians died and the Hebrew children were passed over by the angel of death. Should Jesus petition to be passed over too?  He decides no.  His self-giving is necessary for others to be raised with him as the body of Christ.  Jesus does more than take the blame.  God uses him as the paper towel to clean up the mess, but all those who have come to believe in him have a part going forward.

In a parable drawn from the land around him Jesus speaks of what is necessary for the harvest.  “Unless a grain of wheat fails into the earth and dies, it remains just a single grain: but if it dies, it bears much fruit” (verse 24).  Wild wheat, or emmer, has stalks that produce a few seeds that scatter by the wind.  But the domestic or bread wheat grown in Jesus’ time needed human labour to break up the tightly packed heads into individual seeds so that they might be sown for a good crop.  Like the wheat, Jesus will be broken in order to feed the world.  This breaking of the one into many for new life is the image our Lord wants to inspire us.  Individualism is not the way of Christ.  I cannot save just for myself because life cannot be hoarded for later.  What I  give up prepares me to receive in new ways for God’s glory, not our own.

The cross and the glory are connected.  In El Salvador, there is a tradition of painting scenes of everyday life on wooden crosses that hang in many homes. Sometimes Jesus is shown in the middle, but as often there are portrayals of villagers going about everyday tasks, of land and animals, sun and rainbow, wheat and wine.  These crosses of hope show the things that give meaning to life.  Those that live together within the cross share in the pains and the joys of the community.

Jesus also said to those who gathered around him in this last week, “ ‘When I am lifted up from the earth, I will draw all people to myself.’  He said this to indicate the kind of death he was to die.” (verses 32-33).  Not just his death: but his rising to life again and going up into heaven.  The body that dies becomes the resurrected body, and then the body of Christ in his followers.  God’s glory through one person becomes the way of the cross that is shared by us all.

None of us has to carry the cross by himself or herself.  None of us have to face it alone.  Individually, we are only human.  We get fearful.  We can’t fix ourselves.  We fall under the burdens we struggle to carry.  But as servants together we can live within the way that Jesus has opened for us.  What we give up in serving each other will show God’s glory to the world.  And like the wheat that is scattered for a new crop, we find ways to feed many.  Amen.