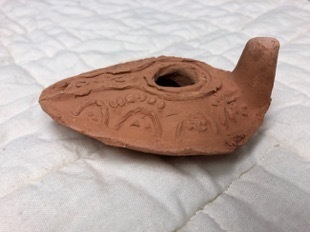 Give me oil in my lamp: keep me burning,

Give me oil in my lamp I pray.

Give me oil in my lamp: keep me burning,

Keep me burning til the break of day.

That old camp song is based on our gospel reading from Matthew 25.  The verses change as you continue:

Give me batteries in my flashlight: keep me shining.

Give me gas in my Ford: keep me trucking for the Lord.

The other day I was commuting home and hit a traffic jam on the Ironworkers bridge.  Not unusual, and not too alarming, until I looked at the gas gauge in my car.  There was less than a tenth of a tank.  I had meant to fill up on my way to work, but I forgot.  So as I crept down Highway 1 with the rest of the world, I kept a close eye on the digital readout telling me my range: 30 kilometres, 29, 28… Did I have enough to make it over the bridge and off to the first open gas station, or would I end up on the side of the road like several other vehicles I passed?  I had a moment of smugness: my car is a hybrid, so I have a backup source of electric energy if needed.  But I didn’t want to put it to the test.  I felt like one of the foolish bridesmaids: watching the wick of her lamp gutter and dwindle.  What would I do differently next time?

We ought to be ever ready for the coming of the kingdom of heaven. Except that we are not.  Just as the some of the bridesmaids in the parable were not ready with oil for their lamps, there are times when we too run on empty.  What is this story of Jesus saying to us about foolishness and wisdom, and about being ready for what may come next?

Like many of Jesus’ sayings, this parable must have confused his followers.  He takes a familiar event- a wedding procession- but then give it unexpected twists.  In Jewish tradition, a newly married couple would be welcomed to the groom’s parents’ home after the wedding celebrations.  All their friends would have waited outside to give them a final encouragement before they went to their marriage bed.  But the groom is late, we don’t know where the bride has got to, the attendants have fallen asleep, and the lamps are burning low.  Some of the bridesmaids didn’t bring extra fuel: maybe they thought it would be provided or didn’t know the couple well enough to predict a delay.  Now there isn’t enough oil for all the lamps.

That’s a problem that the Jewish people have encountered before.  So Jesus’ listeners may be all set up for a miraculous ending.  After all, that’s what Hannukah is about.  About 150 years before Jesus’ time, The Jews defeated the Greek army and rededicated the Second Jerusalem Temple.  There was only enough blessed oil left to light the lamp of the Presence in the sanctuary for one night, but it continued to burn for the 8 nights of the festival.  Maybe the people thought that the bridesmaids in the story would share their oil and miraculously have enough for everyone to welcome the bridegroom.  After all, in Hannukah observance, the central candle on a menorah that is used to light the other candles during the festival of lights is called the “attendant” candle or shamash.  Shouldn’t the attendants with extra oil share out with the others?  But this is not what happens.  They might have all run out at once.

It’s easy to look down on the foolish bridesmaids who didn’t prepare adequately for their responsibilities.  They knew what was going to be expected of them.  They had opportunity and ability to bring what they needed.  On the up side: they were patiently waiting.  And notice that both the foolish and the wise bridesmaids fall asleep.  It is when the news comes that the bridegroom is arriving that things go wrong.  This is when some of the bridesmaids panic because their lamps are going out.  They decide that it is more important to go get oil than it is to be present for the wedding couple.

“But what would have happened, I wonder, had the bridesmaids simply continued to wait, with sputtering lamps and dwindling lights?

What would have happened had the bridesmaids simply waited in the darkness of the night?

To me, this was their mistake. They left, when they should have stayed. The bridal couple surely would have welcomed their friends into the light of the banquet, unconcerned about the state of their oil lamps, happy just to see their friends waiting for them.

What faith it would have taken, though, to wait in such frailty, in such honesty!”

And what about those other bridesmaids?  The ones called wise?  Those who had prepared and had enough for themselves but not for everyone else.  Are they wise because they kept their own lamps burning, because they pointedly didn’t divide the supply so at least some lights stayed on, or because they stayed faithful in welcoming the one who was coming?  Could they, by the very fact that they were shining a small light around them, have helped others see enough to take heart in the joy of that moment of darkness?

I think we have all been in situations when we have not had enough oil for ourselves.  It is frightening not to be able to hold it together, to be vulnerable in our pain and our fears.  Then we cannot trust our own abilities, even our faith: only the Presence of God in the midst of our darkness.  All we can do is wait and hope, and resist running away to find another source to fill up the void.

Then again, sometimes we don’t feel that we have very much strength for others.  Not enough to give away of our own light, even though we feel guilty that we can’t.  There are times when paying attention to our own spiritual life, to renewing our souls through the source of our being, is the most important thing we can do for those who look to us.  When our lamp is filled and our wick is trimmed, we can shine out with a light that will help those around us.

So who is foolish?  Who is wise?  We can plan forward, but there is also a call for us to be ready and open to God’s invitation.  We can shine as best as we are able, but sometimes our flickering light is so dim that only God can find us.  At the end of the parable, those who are ready for the bridegroom are the ones who go in to the wedding banquet.  Jesus doesn’t say at that point which of them had brightly burning lights and which of them stood there with nearly empty lamps, hoping in the darkness.  The emphasis is on those quietly persistent attendants who wait and prepare and love even though they don’t know when the banquet hall doors will swing open for them.

I believe there is good news here for us in our current uncertainties.  Don’t give up on singing Hosanna.  The Hebrew word means “Save, now”.  It’s a prayer shout for help when we are about to run out of gas, when the lights flicker, when our faith wavers, when our strength fails.  But it is also an acclamation of the One who comes in response to our cry:  Jesus Christ.  Hosanna to the Son of David, the King of kings!- who brings the kingdom of heaven to us.  We don’t know the day or the hour.  But we keep hoping that God comes in time to find us faithful.  It may be today.  We may have to get through the next two weeks with what we have.  Or next spring.  Or in our children or grandchildren’s time.  Our job is to be ready.

This week we will commemorate not only the ending of World War II but all those who work for peace in our time.  During those dark years of conflict, there were shortages of many essential items, including oil for cooking and heating and lighting. Many went without. Yet with stubborn perseverance, families made it through that time. In some towns, the people went back to the practice of bringing their dough to a central oven to save fuel. The bread was baked and then taken home again to feed their households.

As people of faith, we have a role to help power the hope.  It’s why we gather on the sabbath- not just for ourselves but for all who need oil in their lamps.  Today, it doesn’t matter if you feel yours is full to the brim or nearly empty.  Let us gather around the light that is here and be open to the Presence of God come among us.  Amen.