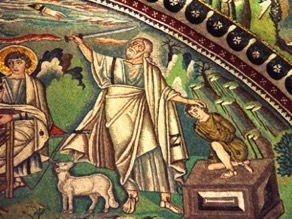 Abraham and Sarah had hoped and prayed and waited for a child.  They agreed to recognize Ishmael by Sarah’s slave Hagar.  But then, when Sarah became pregnant and gave birth to Isaac, their joy was complete.  God had given them the promised heir.  This makes the next part of the story all the more troubling.  God now commands Abraham to take his son up a mountain and sacrifice him.  Jews call this passage in Genesis the Akedah- ‘the binding’.  Christians know it as the sacrifice of Isaac.  The Quran describes a similar incident but implies that the boy might be Ishmael.  All three faiths have this disturbing story about obedience and faithfulness.

Theologian Phyllis Trible coined the term “texts of terror” to refer to those parts of the Bible that shock, horrify, and call up uneasy questions about the God of our faith.  In her 1984 book, she considers passages in which God instigates violence, especially against the vulnerable.  She, like many of us who try to reconcile the God of love with these glimpses of divine wrath, seeks to understand the tension.  How do we cope with the bits of the Bible that don’t fit with our understanding of who God is?

There are several human responses.  One is to excise or ignore the nastier sections.  We can pretend they don’t exist.  Some prefer not to read the Hebrew Scriptures and avoid the angry vengeful aspects of a God that demanded blood and conquest.  In the Book of Common Prayer lectionary, Morning Prayer services used to only have an epistle and gospel reading: neatly solving the problem of having to hear the Old Testament on Sunday mornings.  You will notice that didn’t happen this morning.

Another way is to keep quiet about the more disturbing passages of Scripture and redirect.  I could have preached on Romans or Matthew today.  We have a habit of glossing over that which is complicated.  I have heard a few simple sermons on how the sacrifice of Isaac is an example of how if we put all our faith in God, He will come up with a solution no matter what.  Or that some parts of the Bible are more sacred than others, so we can pick what we put our energy into believing.

But there is a third alternative, although it involves more work.  This is the path of wrestling with the texts.  Rather than hiding them or dismissing them with platitudes, we can bring them to the light and risk the hurt and the healing they may bring.  Perhaps in the process, we may find that the God we thought we knew is not that God.   After all, if we avoided the other difficult things on our lives, we never would have the opportunity to find out where God is in the midst of them.  And sometimes we need to pass on the terrible stories so that others can hear what we have been through.  So that they in turn can draw courage from stories of faith and revelation.  And so they in turn don’t repeat the mistakes of the past.

Texts of terror are not limited to the Bible.  They are under the surface of our society.  They are woven into our history.  If they are not told, how do we struggle to make sense of God?  I understand that for survivors of trauma it is very difficult to relive the events.  Veterans of wars tend to keep quiet about what they have witnessed, perhaps only sharing with comrades who can empathize with the terrors and anxieties of conflict.  Those who have lived through residential schools and internment camps grope to find suitable words and appropriate emotions to deal with the physical, emotional, and spiritual wounds.  Victims of racism have their stories too, narratives that are different from those told by authorities or written in books.  If we do not tell these stories, how can we honour the dead or change the future?

The tale of Abraham’s planned sacrifice of Isaac goes against the ethics of the majority for a parent’s relationship with a child.  It goes against what the majority of people would expect God to demand from a human in worship.  Yet the story still gets told.  It has its roots deep in our faith tradition.  It is all the more terrible because it starts with God’s instigation:

“Take your son, your only son Isaac, whom you love… and offer him as a burnt offering” (vs.2).

Other religions of that period practiced child sacrifice.  Abraham thinks he hears his God demanding the same.  Was he hoping there would be a way out, or that he was wrong? (God had already provided another son of Abraham’s, Ishmael, but that doesn’t seem to be the back-up plan here).  Did he know all along that God was not going to follow through when he told his boy that God would provide for the sacrifice?  And, if God is omniscient, did God know all along that Abraham would agree to this and have the happy ending planned?  Or did God have a back-up plan as well, allowing for Abraham’s capacity for free will and choice as well as obedience.  These are modern questions for an ancient story.  What we do know from the text is that when it got to the moment when Abraham would have been willing to sacrifice Isaac’s life, Abraham did not follow through with the knife.  The revelation came to him that this God that he had committed to serve and worship was not the god he thought he knew.  Not that God who wanted sacrifice, but this God who loves life.

The story of a father willing to sacrifice his child creeps into the New Testament in troubling ways if we do not struggle with these texts of terror.  Jesus’ death on the cross could easily be cast as another story of a sacrificial son.  But again, the God we think we know is not that God.  In our Christian narrative, it is not a heavenly father who sends his son into the world to die in an act of supreme child abuse.  It is God who ends up doing the job Godself through Jesus.  God doesn’t ask for someone else to substitute for sin.  He offers himself, binding the godhead onto the cross.   This is so astonishing that we have to keep telling the story of God’s love, and struggling with the crucifixion.

If we were expecting an angry and vengeful God, this is not what we get.  Instead, the Bible shows us messy and complicated stories of God’s faithfulness to us in the midst of human choices to be faithful or not.  Our God is present in terrible times, both the mistakes we bear ourselves and the oppressions and needs of our wider world.  How will we share and hear stories of the terrors.  How will we seek and listen for the voice of the Holy within them, revealing the God of love, and not that God we thought we knew?  Amen.

Come To Me Not That God Like a Father