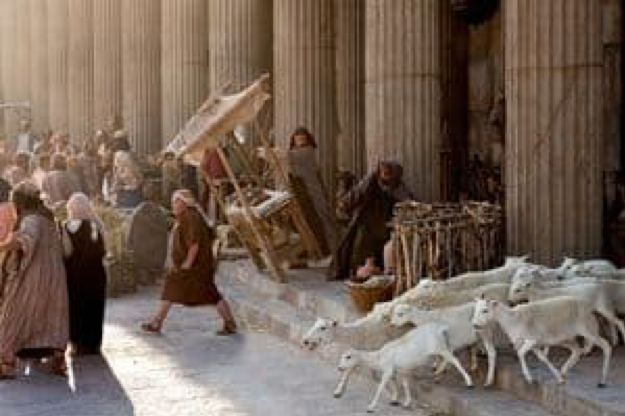 Jesus is angry, and he demands our attention.  There’s a temptation to run away and wait until he calms down a bit, but John’s gospel doesn’t give us that option. Right at the beginning of his ministry, Jesus marches up to Jerusalem with his followers and protests in the Temple- the holiest place of the Jewish faith.  He makes a whip out of cords and he chases all the livestock on sale out of the temple courts.  The tables of the moneychangers are turned. More than the piles of coins are upset: all the Judean officials are in a turmoil.  How dare this country preacher attack the sacrificial practices that sustains the Temple?  What is he doing to the building?

Jesus’ righteous anger is not directed at the people but at the system.  All the rules and regulations that generations of religious leaders have used to interpret the covenant have put up barriers for people to come to God.  Some of the laws outline what good Jews are to bring as tithes to the Temple at the major festivals of the year.  Now if you lived a long way from Jerusalem, it was awkward to pack a couple of doves or a cow in a suitcase.  Instead, the institution provided a way for people to buy them at the door.  The trouble was that the coins everybody had to use under Roman occupation had an image of Caesar stamped on them.  They couldn’t bring that money into the Temple because it would be idolatrous.  So in the courtyard there were tables for currency exchange to a special temple coin, which you then used to buy your sheep or cow or dove.  And you can guess that all these steps paved the way for every entrepreneur to make a little on the side, with the poor getting ripped off in the process.  The Temple marketplace was a system that accommodated to political and economic pressures to benefit both the Romans and the Judean aristocracy.

When Jesus shouts out “Stop making my Father’s house a marketplace!” he is not primarily addressing the moneychangers themselves but all those who are vested in keeping privilege in the system.  Even King Herod had been taking a cut for a massive works program to restore the Temple to its glory days.  The construction had been going on for 46 years (and with the way that the accounting was probably being managed, might go on for a lot longer!).  The Jews then challenge Jesus: how dare he think he has the authority to disrupt the business of the institution?  We have to be careful here because in John’s gospel the term “the Jews” doesn’t refer to the whole Jewish people.  It’s a reference to those Judean religious leaders who were threatened by Jesus’ teaching and actions.  Jesus responds by saying, “destroy this temple and in three days I will raise it up.”  He’s not talking about the building.  He’s talking about his body.  More than that: our Lord is pointing towards the true meaning of sacrifice for forgiveness.  It doesn’t come from providing a cow at market price.  You can’t sell God’s mercy with a temple coin.  And you can’t decide who is rich or worthy enough to come in the house of the Lord, or even what constitutes holy ground.

Jesus takes the whole idea of the Temple as the sacred seat of God and relocates it to his body.  The body of Christ.  The gathering of those who believe in the Word he had spoken.  His disciples remember this, and it gives them courage as they see the Temple in Jerusalem fall again to the Romans in 70 A.D.  It sustains Christians ever since who have lived through times of war and disaster and migration.   Although they have lost their churches, they are still the Church.  The kingdom is not about privilege but participation in the new life in Christ.  We have had the experience lately of being outside of what we knew as sacred space.  In virtual gatherings, we have given up much of what constituted the institution of Sunday morning worship.  We have prayed and read and tried to sing together.  And Christ has been with us despite the lack of a physical site and the changes in our practices.

Sadly, we haven’t managed to quite cleanse the temple.  We are still a part of the inequities of the systems around us.  Over the centuries, the institution of the Church has absorbed and reflected societal biases of race, gender, class, and religion.  When we are not aware of the ways we are part of the marketplace, this scripture reading provides a wake-up call.  Jesus is in the building, and he is drawing our attention to all the practices we participate and sometimes benefit from: of justice, politics, economics, commerce, taxation, and healthcare. Consider who does not benefit; and who is being short-changed at the door.  How are we called to dismantle and rebuild for the kingdom?

To confront the things that need to be changed needs more than passing interest.  Being meek and mild won’t cut it.  Jesus showed determination, passion, and anger fueled by injustice and harm.  Those same qualities can be channeled into creative and collaborative change in our time.  This is more than housecleaning.  This is nothing less than re-imagining what the house is for.   The scale of work is huge, but each of us can take on a task.  When we are faced with a whole system, find one thing we can disrupt.   This week, Jesus is making room for all in His Father’s House.  Let’s help him turn the tables.  Amen.