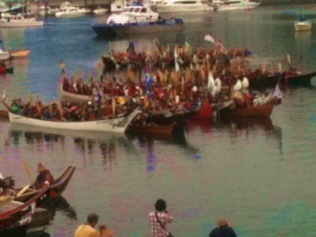 Enlarge my heart that it may be big enough

to receive the greatness of your love.

Stretch my heart that it may take into it

all those who with me around the world believe in Jesus Christ.

Stretch it that it may take in all those who are not lovely in my eyes,

and whose hands I do not want to touch;

through Jesus Christ, my Saviour, Amen.

-       Prayer of an African Christian, from Bread of Tomorrow

Now after John was arrested, Jesus came to Galilee, proclaiming the good news of God and saying “the time is fulfilled, and the kingdom of God has come near: repent and believe in the good news” (Mark 1:14-15).  For the followers of John the Baptist, Jesus’ timing seems a bit off.  The authorities have just cracked down on their leader.  Arrest isn’t good news.  Not the social and religious change they were hoping for.  And yet this is when a young rabbi from Nazareth takes up the cry: “repent and believe!”  The kingdom of God is breaking in, and those who perceive it find a larger life.

Jesus begins his public ministry by calling for followers.  He doesn’t hold a big rally at the Jordan river, or advertise auditions for “Who Wants to be a Disciple”.  There is no baptism preparation class to make sure they know what they are getting into.  Instead, he goes out to meet them in their daily lives.  While strolling along the shore of the lake, he sees a boat on the water.  His voice carries clearly to the men casting their nets.  “Follow me, and I will make you fish for people” (verse 17).

Theologian Ched Myer, in his book Binding the Strong Man, has this to say about Jesus’ invitation: “There is perhaps no expression more traditionally misunderstood than Jesus’ invitation to these workers to become ‘fishers of men.’ This metaphor, despite the grand old tradition of missionary interpretation, does not refer to the ‘saving of souls,’ as if Jesus were conferring upon these men instant evangelist status. Rather, the image is carefully chosen from Jeremiah 16:16, where it is used as a symbol of Yahweh’s censure of Israel. Elsewhere the ‘hooking of fish’ is a euphemism for judgment upon the rich (Amos 4:2) and powerful (Ezekiel 29:4). Taking this mandate for his own, Jesus is inviting common folk to join him in his struggle to overturn the existing order of power and privilege.” (Binding the Strong Man, p. 132). Fisher for people is active, not descriptive.  In other words, Jesus is not trying to give them a new job but a different purpose. The disciples are bait to change the world!

Imagine those first disciples of Jesus, sitting in their little boat with rough wet hands, pausing to understand this voice coming to them across the water.  Jesus is calling them to something larger than their familiar, ordered lives.  Simon and Andrew, James and John, had probably spent all of their years close to the village where they were born.  They were fishers because their fathers were fishers before them.  It was all they knew, after all: a job that fed their families and supported their community.  Now this teacher is giving them a choice to enlarge their hearts.  In their choosing, the world changes for them.

This is the start of a journey that will take them to places they have never been before, to experience new cultures and ideas, to be exposed to the cruelty and injustice of others’ lives, and to witness to the good news of God’s kingdom breaking in on it all.  Through the one they call Teacher or Rabbi, men and women learn what it is to be truly loved and valued. They also begin to understand the cost of leaving a smaller worldview behind.  No longer can they pretend that wider injustices do not affect them, or that the vulnerable and the marginalized are not equal in value to God.  Again and again, they have to struggle with prejudices and limitations to encounter the unclean, the foreigner, and the unlovely.  Repentance seems to involve a lot of revisioning about what the good news actually might be!  At times, they will be tempted to reject what Jesus is saying, and to turn and run from the action.  But they can never go back to being content with who they were before.  They are fishers for people.

The bait that God uses is the changing of their lives for good.  Others see this ragtag band of disciples and how they are different now for having met up with Jesus.  Even their families and friends notice.  The very fact that these simple fishers have had the courage to leave their nets and fathers to set out after Jesus sends ripples through their community.  The act brings the kingdom nearer.  I don’t know that the wives and children of those first followers had an easy time of it.  Did the disciples send money home to help their households survive?  Did the village come together to support them while their husbands and fathers were busy with the gospel?  In the joy and the pain of ministry, those who notice the vulnerable and respond are the ones to whom the kingdom comes near.  Awareness opens up possibilities for discipleship.

In my own life, I have found that it is encounters with our broken world that lead me deeper on the path of discipleship.  The 2011 Truth and Reconciliation Commission Hearings in Vancouver was one such event.  Once I heard the stories and met the people who their lives and communities so profoundly hurt by the Canadian residential school system, the injustice was no longer “out there” for someone else to mend.  I had a part to play in speaking to the powers in the system and for examining my own privilege and the benefits I enjoy as a result.  Following Jesus meant hearing the difficult truths spoken by others, and confronting my inner fears as a result.  I can’t unlearn now the stories that courageous and grieving people shared in those tellings.  Jesus helps us on the way to see the wounding and the loveliness of others through heavenly eyes.  Not to pity them but to join together to change in the name of the One who calls us.

Another disciple was called yesterday to a wider ministry.  From the relatively quiet lakeside ministry at St. John, Shaughnessy, our electoral synod in October raised the Rev. John Stephens up with prayer to be bishop among us.  We give thanks today for his discernment and courage in answering the call of Jesus to follow.  We pray for his wife Ruth and his children as they are changed by his new role.  And we ask God’s grace as we work together through this time of transition.  Archbishop Melissa has gifted us with her ministry for seven years and we are grateful.  Now Bishop John is among us to hold the vision of Christ that enlarges our hearts.  The Anglican Church is living larger thanks to all who keep answering the cry to repent and believe.  Amen.