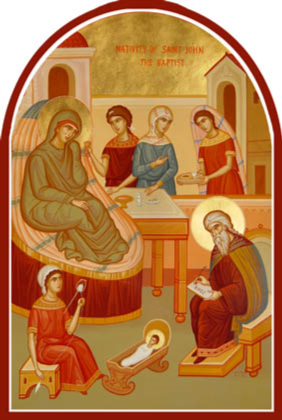 This is certainly a surprising gospel and feast day to be celebrating on the door step of July and summer plans. We are familiar with John the Baptist coming to us in Advent, but not so now at the end of June. Be that as it may, we celebrate today the Birth of John the Baptist and ponder what these events have for us today as we begin our summer activities. As we do so, I wonder if you have met a prophet before. Would you recognize a prophet if you saw one? I am willing to bet that at some point or another we have all met a prophet. We can all probably quickly recall people of note such as Martin Luther King Jr, Nelson Mandela, Stephen Lewis and a host of others and agree that these people are indeed prophets. Many of us will be quick to list the noble and brave works they have done for their cause and in turn for the betterment of society. John is a strong Biblical prophet who ‘stands out’ in the crowd. It is his voice we hear in Advent who cries out in the wilderness and points us to Jesus. John, like so many other prophets because of their actions are people who stand out in the crowd for one reason or another. But I wonder if prophets can look like ordinary, everyday, unassuming people too. People who easily blend into the crowd. Can these people be prophets too?

The reality is, prophets come in all shapes and sizes. Each of them, regardless of age, gender, race or creed help point to a greater truth that is often quite difficult to admit to ourselves. In addition to the prophets we can readily name, there are others, lesser known prophets in our lives. People who we meet every day and can easily overlook the prophetic power and influence they have. When we pay closer attention to this, we may notice that the stay at home mom, for example, is doing profound work in raising and nurturing the children in her care. She will be the primary person responsible for raising her children to be good, moral and upright citizens in society. It will be her that wipes away their tears and comforts them when their hearts break for the first time. This work is prophetic work and happens every day, everywhere.

But there is another side to prophets too. While we may notice and uphold the ‘good’ that they do, prophets also have a shadow side. Sometimes it is their shadow side that makes them hard people to live with. Because they point to a truth that may be hard to hear and admit, they are often restless, angry and frustrated people. Often this frustration and anger is vented on others, often people they love.

Liz and I know of one such prophet. He lives in the Eastern United States and for this sermon he will be called ‘Ken’. Ken is married with one daughter. Ken is also a priest, an alcoholic and a prophet. If you were someone who was in any way abused or lost by “the system,” regardless of what system that may be, Ken would be one of your strongest allies and advocates. If you were alone, hungry and needed shelter, Ken was the person who would move heaven and earth for you. He was never a good parish priest. Almost every parish Ken served as Rector neither he, nor the parish, did well. He was angry and frustrated with parish ministry, the diocese and the bishop at any given time for any number of reasons. Ken has no time for policies, procedures and bureaucracies that prevent people from accessing resources and the support they need “now!” Not when the ‘proper process has been done.’

For Ken he would get extremely frustrated with his parish if they decided not to do something profound because of budget constraints, or because of perceived ignorance or uncaring for the poor and needy of society. If someone came to the church looking for money, food or a place to stay, only God could help the person or parish administrator who would turn such people away. His stance from which he was unwavering, was that if someone comes to us, the church, looking for help, we help, no matter what.

It doesn’t take too much to realize how frustrating parish ministry could be for Ken, or any form of ministry where people are held to account by administration or bureaucracy. More than once he would storm into the bishop’s office and demand to know why the church isn’t doing more! It is also unfortunate that Ken’s family and friends are the ones who have had to be on the receiving end of most of his anger and frustration.

While he was never a good parish priest, he is an excellent prison chaplain where he can advocate and agitate for change in manner that is suited to that environment.

Despite the shadow side of our prophets we need them. We need people like Ken who can hold before us a broken system and the hurt of the world and demand that we make the changes we need to make and do better. Ken, like many prophets, demand of ourselves that we dig deep and challenge the status quo of any system.

We need prophets like Ken because by their example we can grow and develop ourselves. We learn to be brave and question those in authority and challenge laws that are corrupt. It is because of prophets, for all their faults, that governments can be over thrown and dictatorships end. Notice how John’s father, Zachariah, is unable to speak until following the direction of the Holy Spirit and names their new born child. Then, after being vulnerable to the will of God is he able to speak, prophecy and praise God. All too often I find that we are much like Zachariah where the will of God takes us to places we would rather not go and where we are brought to silence by the overwhelming work we find ourselves as a church, nation and world wrestling with. However, it is the voice of prophets who agitate us into action and to submit to the will of God. It is then in those moments that we as a people and nation can find the voice of God within us and begin to speak a much-needed truth to power. Think for a moment about the many and the work involved in ending Apartheid, Residential Schools, racist policies, minimum wage vs living wage, rights of women and a host of other examples all made possible through prophetic work. This does not mean to say that this work is complete. In many ways, the work within the examples I have mentioned, has only just begun to gain some traction.

The reality is we live with prophets all around us. Some of them stand out and are noticeable. Many others blend into the crowd as they continue to engage with their prophetic work. It doesn’t take too much to realize that we too are called to be prophets. God calls us through the person of Jesus to always question unjust practices, ask questions, make choices that benefit not just ourselves, but those less fortunate. We are called to use our power and privilege to help the powerless. Sometimes because of the values we hold, the positions we take on issues, we are seen like John, to be ‘standing out’ in the crowd. But regardless of how we look to others, we follow the examples of prophets who have gone before us, find our prophetic voice and in all ways point to Jesus. We do this because deep down we know that this is the right way to live in the world. In so doing we begin to lead a prophetic life.