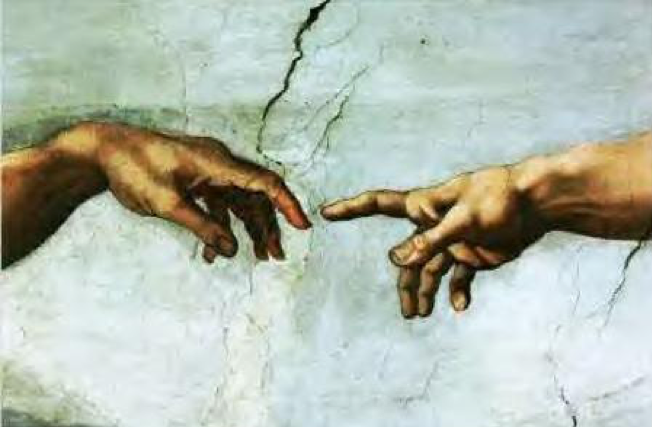 Detail from the Sistine Chapel, Michaelangelo

Risen Jesus, we thank you for your greeting, ‘Peace be with you’. The shalom of God, deep lasting peace; peace that brings inner calm; that keeps a person steady in the storm; that faces the persecutor without fear and proclaims the good news with courage and joy.  This is the peace that reconciles sister to brother, black to white, rich and poor, young and old, but not a peace that is quiet in the face of oppression and injustice.  This is the peace of God, the peace that passes understanding.  Amen.

-       John Johansen-Berg, Prayers of the Way, Community for Reconciliation 1990

Here we are, a week after Easter.  Some of my friends are saying that Jesus has risen, but the world doesn’t seem to have changed much.  Honestly, they don’t seem to have changed much either.  Still fearful; still hiding behind locked doors.  They tell me it is because they are afraid of the Jews. Not all the Jews, obviously.  But the authorities were suspicious of us from the start.  Both the religious leaders who don’t like to hear a truth different from their own and the civil authorities that have their own stake in the power system as they stand.  When Jesus came living and teaching a way that strips off privilege and invites the comfortable to give up some of their security, nobody liked it very much except those who had nothing.  Most called Jesus dangerous, crazy, or out of touch.  Even his own followers questioned what God could be up to.  I wasn’t the only doubter.  I just got the label. Doubting Thomas.

Hear me out and I’ll let you decide.  You, who are listening with your own questions and doubts. I am guessing that you are struggling, like me, to believe that there is a path forward to something better.  I’m asking for your attention so I can explain, with my poor words, what you might have already read or heard about.  John’s account, in chapter 20 of the gospel, tells the truth.  I’d just like to fill in some details.

I wasn’t with the other disciples that first day after the Passover.  In the morning, Mary had gone to the tomb where Jesus had been laid and found that the body was gone.  After running to get Peter and John, she returned to the garden.  She says that there she met the risen Lord, that he spoke to her, that he told her not to hold on him because he had not yet ascended.  So Mary let him go and went and told the others, who had barricaded themselves in the meeting house.  It was that same evening that Jesus came to them as they gathered.  The thing is, I wasn’t there.

I can hear the blame.  "Thomas is too afraid".  "Thomas has given up".  "Thomas has lost his faith".  (Or meant more kindly: "Thomas is depressed and struggling with his own demons. He can’t cope".)  How do you know I wasn’t already out in the streets telling others about the resurrection?  Or doing ministry with the sick or the poor?  Or taking care of my family?  Just because the gospel is silent on this, you don’t have to imagine me in the worst possible light.

I want to go on record that at no time did I say that I really doubted God or my Lord Jesus.  Sure, I asked questions all along the way.  So did the other followers. That’s not the same.  What I doubted was us.  I doubted myself and I doubted my fellow disciples.  If we were to be the Church, to be the resurrection people, what were they doing still hiding in a locked house?  How could I trust the others to work with me to make the kingdom of heaven come? They couldn’t even risk being out in public!  When the other disciples came to me and said, “we have seen the Lord”, that was the first time they had reached out to me in the week since Jesus had died.  I didn’t fully believe them, then.  I thought maybe they were making it up to get me back in the group.  Some collective delusional vision of what they yearned to be true.  I wanted to touch Jesus myself and not take their word for it.  In spite of my misgivings, I agreed to come back to the meeting place.

So here we are, again on a Sunday. And Jesus comes among us and says, “Peace be with you”.  He asks me to reach out and see and touch.  But I don’t need to.  Not now.  Because I have had a revelation, and I want to share it with you.  You have not had the opportunity like me to physically be next to the risen Christ.  But I can share with you how to get in touch.

First, when Jesus offers his greeting of peace, he is asking us to be at peace with each other.  He is giving us the grace to forgive each other in His name.  That’s important, because I know how much I get hung up on resentment and discouragement.  After all, other disciples are fragile and human, and the institution we have made called the Church is full of brokenness and error.  It’s easy to doubt whether any good can come out of it.    Even when we think we have made some progress to heal, an old wound flares up and rips open again- like the situation in Northern Ireland.  All I can affirm is that when we work for peace and forgiveness, we do it in the power of the One who comes among us to reconcile. Again.  And again.  Seven times seventy times, if need be.  Not with a cheap “forgive and forget until it happens again” kind of grace, but with a painful commitment to examine the roots of the problems.

Secondly, we are called to remember that now we are the Body of Christ.  If we want others to see the reality of the risen One, we have to brave the street that is outside the meeting house. It is our job to carry the image of Jesus to others.  On Sundays we gather to pray and to practice what it means to be Christians.  The rest of the week is for to getting out as best we can to share what we have learned.  It is not a case of being an individual with God against the world.  We are each part of a community that, at its best, keeps us connected to Jesus.  We pray and sing, break bread and learn, to keep ourselves honest and attuned to the source of our being.  We need all the parts of the body to function.  Nobody is disposable.  Nobody is to be taken for granted, although too often those who minister quietly and faithfully don’t come to our attention.  Yes, within the community are those who will disappoint us and there are those we will disappoint.  And there are many institutional problems with the Church that demand our continued energy and persistence to overcome.  Maybe we can have our doubts and believe at the same time that Christ is present in this human form.

All I know is that I didn’t completely give up on my friends and they didn’t completely give up on me either.  What is most important is that God didn’t give up on any of us.  Jesus gives us the power to forgive each other and to find peace when we gather in His name.  In gathering, the Body of Christ is present.  We can see and know and touch our Lord and God.  Don’t keep that miracle locked away in a sanctuary or a home, but to share the good news.  My advice is to keep in touch.