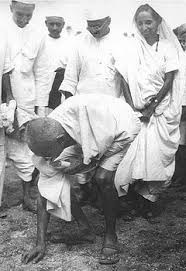 Dear God: you are love, you are wisdom, you are humility.  Amen.

What gives you the right to tell me what to do?  It’s a fundamental human question, whether coming out of the mouth of a rebellious teenager or the struggles of a western democracy.  The religious leaders challenged Jesus by asking “Who gave you this authority?”  By even asking him the question, they concede that this man has some sort of authority to which others are responding.  The dilemma is if they can admit God’s hand in what is going on.  As Warren Carter writes in his commentary Matthew and the Margins, “the central issue is not his identity but whether they will recognize it”.   Jesus exhibits humble leadership that points to God’s love, not a personal need for prestige or power or preservation.  Those that follow God’s will come up against the people and power structures of this world that don’t want to hear any authority except their own.  Often those in power feel justified in claiming supreme or divine right to back their positions.  What they haven’t left room for is the possibility that God is inviting another way, a way exemplified by Jesus.

A young East Indian was profoundly influenced by reading the New Testament.  In the life of Jesus, he found a model for a style of leadership by which he helped change a nation.  In 1930, India was under the control of British colonial authorities.  The production, sale, and taxation of many goods was strictly controlled.  After months of prayer, Mahatma Gandhi decided on a course of action to demonstrate against the injustices perpetuated by the laws.  With a following that grew through the weeks, he walked 240 miles across the country to the town of Dandi on the ocean.  There he knelt, picked up a chunk of sea salt from the beach, and announced, “I have manufactured salt.  You have to arrest me”.  His civil disobedience resulted in political turmoil and international attention to the Indian independence movement.  The non-violent protests came to be called “satyagraha”: the insistence of truth to power, and laid the framework for many protests since.  Its roots are in the work of Jesus Christ.

The apostle Paul addresses the problem of divisions in the community by reminding us of the nature of salvation.

“Let the same mind be in you that was in Christ Jesus, who though he was in the form of God, did not regard equality with God as something to be exploited, but emptied himself, taking the form of a slave, being born in human likeness, and being found in human form, he humbled himself and became obedient to the point of death- even death on a cross” (Phil 2:5-8).   This “self-emptying”-or in the Greek “kenosis”- is a deliberate choice of God.  God’s power is self-limited in the person of Jesus.  It is held back because Jesus is not working for his own power in the system but for the empowerment of all.  He cannot succeed in God’s will unless there is room for everyone to succeed.  There is the same choice for those who follow Jesus.  We are fully human because of each other, not on one’s own.

True leaders show this quality of openness to others in their public service.  It comes down to an extroverted worldview, as theologian N. Graham Standish calls it.  Life is bigger than me.  God’s dream is bigger than me.  So there needs to be an element of surrendering control and allowing the movement of the Spirit.  There is a deadly arrogance in assuming I know what God wants and you don’t.  Leadership without humility becomes coercive, selfish, and even idolatrous: when our own ideas displace those that God yearns to share with us.  That kind of authority is the opposite of kingdom power.

And it doesn’t mean that leaders are doomed to be weak or to be doormats.  Putting God in the driver’s seat is not the same as taking your hands off the steering wheel.  Active engagement with others is very different from passively accepting what someone else says.  There is grace and opportunity in listening and reflecting even when things are uncertain.  Through questions and nudges leaders can find out more than persuading others to agree with their agenda.

But most of all, humble leadership relieves anyone in a position of authority from having to be perfect.  Leaders make mistakes.  It is a great temptation never to take a position of responsibility because we are afraid of being wrong, messing up, and hurting others.  We make excuses of not being able to give enough time to the task, of not having the skills, of hoping that there is someone- anyone- else that can take the flak.   When I was considering the path of ordained ministry, one very wise senior gave me this advice:  If something is worth doing, it is worth doing badly.  That is, don’t let your own perfectionism or fear of failing keep you from doing what is needed.  The imitation of Christ is what matters.  You don’t have to be Christ. You just have to be in Christ.

Humility is a virtue that gets dismissed by the world as weak.  Yet the leaders in both public and religious life that have made the most changes for the common good are those who exemplify this humble leadership of Christ.   St. Francis, Chief Dan George, Martin Luther King, RBG, Dr. Bonnie Henry.  They aren’t perfect; but they each carry an authenticity, a truthfulness that speaks with authority.   We are each invited into this way: to do nothing from selfish ambition or conceit, but in humility regarding others as worthy as ourselves.  Let each of us look not to our own interests, but to the interests of all (Phil 2:3-4).   What the world may regard as weak is a strength that can overcome human divides. The commonwealth of heaven is open to all.  Let us work with the humble leaders who recognize this.

“Humble leadership is a radical, prayerful openness to God, as God guides us to lead people to experience what God is already preparing” - N. Graham Standish

Show your spirit. Wear red! A Pastoral Note from Stephanie A Thank you to the Men of St. Martin’s

What is to prevent me? All We Like Sheep Not by our own power