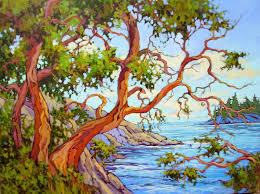 May the words of my mouth and the meditation of our hearts be acceptable in your sight, O God, our Rock and our Redeemer.  Amen.

In the old-growth forests of Haida Gwaii stood a Sitka spruce called Kiid K’yaas, the “Ancient Tree”.  For over three hundred years it had towered 50 metres over the banks of the Yakoun River.  The Haida people regarded it as a sacred ancestor, and settlers seeing it for the first time new it to be special.  A rare genetic mutation gave it golden needles rather than green, and it stood out amongst the deep greens of the Pacific Coastal rainforest.

Then in January 1997, an unemployed forest engineer took a chainsaw to Kiid K’yaas in a misguided act of eco-terrorism.  In a letter to the press, he said that he was motivated by hatred towards university-trained professionals and their extremist supporters.  The Ancient Tree fell two days later in a windstorm.  The local community held a memorial for it, as they would for a great chief, and the perpetrator was charged and ordered to stand trial.  In February he refused to take a ferry to go back to the island for the legal proceeding.  Instead, he tried to paddle from Prince Rupert to Masset in a sea kayak, 60 km across Hecate Strait.  He never made it and it is unknown whether he drowned, was murdered, or fled.

But there is another part of the story.  Twenty years earlier, botanists from the University of British Columbia had visited Haida Gwaii and obtained permission from the First Nation to take cuttings from the golden spruce.  They proved very delicate and difficult to grow.  One sapling survives in the UBC Botanical Garden.  After the tree’s felling, more cuttings were taken and grafted.  One of those has returned to Haida Gwaii and is planted in the churchyard of St. Mark’s Anglican at Port Clements, near to the original site.  I visited it three years ago.  It was only 1 meter tall and protected by a barbed wire fence three times its height.  A plaque reads “Carefully grafted from the Mother Tree, this seedling, planted in the spring of 2001, serves as a reminder of the great loss to many, while at the same time symbolizes new beginnings and hopes for the future”.

The new shoot needs protection and encouragement.  Because it has been grown from a branch cutting, it needs to be staked in order to form what is called “a strong leader”- that central shaft that grows upwards rather than sideways.  It needs the right soil and climate, shade and water.  It needs the Creator’s energy and the community’s assistance.  This daughter tree will never be the same as Kiid k’yaas, which is now just a stump rotting back into the rainforest.  But something new is growing.

The future will never be the same as the past.  The prophet Isaiah knew this, as he spoke to the people of Israel in the midst of the kingdom’s destruction.  The people wanted reassurance that God would return them to the golden days of King David.  But God’s promise is for a new golden age that will be quite unlike the past.  Jesse was the father of David, the idealized ruler of Israel.  Now, even though the dynasty has been chopped down like a tree by outside nations, there is a new hope.  From the stump, a new shoot will spring up.   There is one who is coming who will be filled with the Spirit of the Lord to bring in God’s reign.  The new “Jesse” tree will be rooted in the old, but it’s going to look decidedly different.  The rules are going to be turned upside down!

This ruler will bring about righteousness and justice not by getting revenge on enemies but by judging with wisdom.  Words of equity will kill off the plans of the wicked, who want power and wealth for themselves.  The vision is of a new way of being in harmony with creation, where even traditional enemies find a truce.  Isaiah 11 verses 6-8 gives impossible examples.  The wolf shall live with the lamb, and the child shall no longer be bit by the snake.  In fact, a little child shall lead them.  The prophet doesn’t say how this will happen: only that he has seen a time when it will be possible.  And with God, anything is possible.  Even getting a stump to grow.

There is this promise for the future: “On that day the root of Jesse shall stand as a signal to the peoples; the nations shall inquire of him, and his dwelling shall be glorious” (verse 10).   The people who now mourn the loss of their heritage have to look forward to a time when a remnant will return to Israel and Judah.  And their task is to pay attention to the signs of the times that will draw other people to ask about the kingdom to come.

Reading this passage with Christian eyes, we see that Jesus fits the profile.  If we trace the genealogical tree down through the generations from David to Mary and Joseph’s son, he is the a shoot from Jesse.  And in the Godhead, he is also at the root of it all: the Ancient One.  It’s why this passage has inspired images of the Jesse tree that has Jesus central, like the stained glass window here at St. Martin’s.  But the growth doesn’t end with Jesus.  The kingdom is not complete until all are grafted into this new tree of life.

There is a pattern in life.  We mourn what is dead and gone.  We let it go.  Then we become aware of something else stirring to life among us.  We nurture it together and help it to grow.  If we are open to the signs, God will bring about a new thing in us.

It is right to grieve what has been and is no more.  All communities can think back to what they consider a “golden age”, or “the glory days”.  No matter how good it was (and we tend to have selective memories when it comes to remembering what happened) it has passed by.  The future will not be the same as the past.  However, our task now is to pay attention to the conditions now that will help God’s new work in us to grow.  Let us process the past in ways that create healthy compost rather than obstacles for seeding.   Here in the Pacific Northwest, we are familiar with the idea of a “nursery log”: a rotting stump that provides the nutrients and the shelter for a little plant to take root and grow, even as it decomposes back into the earth.   Stumps have an important role that should be celebrated.  Their legacy makes something new possible.  God’s covenant with Israel made it possible for some of the Jewish people to recognize Jesus when he came.  And everything that has been invested in the Church up to now makes it possible for the risen Christ to raise up the kingdom among us.

How can we help with the kingdom? Let us water the soil with prayer, and shade the site with compassion.  Let us nurture community and celebrate diversity that reflects the far reach of God’s love.  If Christ is to be our leader, we are to stake everything on him so that the root of Jesse grows to fill the earth with the knowledge of the Lord.  Amen.