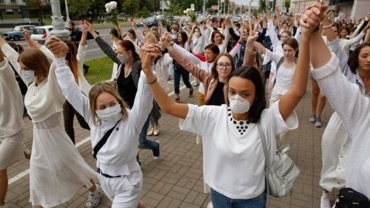 I have faith in the power of forgiveness that leads to healing.  All three of our Bible readings today point to this truth.  We hear about Joseph being reconciled with his brothers who sold him into slavery.  Then we struggle with Paul to understand why both Jews and non-Jews need the mercy of God to together be part of the plan of salvation.  The theme is taken up again, with a twist, in the gospel story of Jesus’ encounter with a Canaanite woman.  Faith triumphs over religion and race.  Forgiveness flows into healing, not just for the woman’s daughter, but for the ministry of Jesus.  He is challenged by this “unclean” woman to show God’s mercy is not just for some but for all.  “Even the dogs eat the crumbs that fall from their master’s table” (vs. 27).  And, as theologian Mark Davis wittily remarks, from this point onwards the gospel goes to the dogs!

Without forgiveness there is little hope of healing.  Historic hurts get carried for years, for centuries sometimes.  And if there is no faith that things will get better if those hurts are laid down, nothing changes in relationships. Those who have been betrayed and oppressed, who have seen their families enslaved or forced out of their homes or killed in conflict: they have little reason to trust in promises from ones who have mistreated them.  It takes courage to believe that someone is able to help.  It takes even more courage to challenge the boundaries of who deserves that help, and to persist in seeking it even from an enemy.  Mercy is revealed in concrete acts of reconciliation and healing.

This week we did not get what has been trumpeted as an historic peace agreement in the Middle East.  What seems to have been reached on paper is the normalizing of diplomatic relationships between Israel and the United Arab Emirates, for which the administration of the United States is taking credit.  But however laudable this first step turns out to be, it does not in itself resolve conflicts between Jewish and Arab peoples that stretch back before the time of Jesus.   That can only happen when there is enough faith to promote forgiveness and healing.

The ancient Biblical land of Canaan, which included parts of Lebanon, Syria, Jordan, and Palestine, was home to a variety of ethnic groups under several kings.  It was not unlike the modern United Arab Emirates, a sovereign state which is a federation of 7 emirates or city kingdoms.  The Canaanite woman who approaches Jesus in Matthew 15 would have come out of a similar Arab culture and faith background; one that was very different to the Judaism that gave birth to a Messiah like Jesus.  Like many ancient and modern women, she is not in a position of power.  She has no say over what the leaders of the nations are doing, or the course of the conflicts and economic hardships that impact her life.  She and her family have suffered.  She wants peace and safety in her life.  She wants healing for her little girl.  Driven by her needs, she decides to seek out this healer of Israel and see if the loving God he is preaching is for her, or if the Jewish God is a racist.

The gospel of Matthew presents Jesus through this encounter in a particularly uncomfortable way to us as modern readers.  Just before this passage, the Lord is teaching the crowds about what is unclean and what is unclean.  It’s not just about tradition, he says, although the purity laws are important to every Jew and especially the Pharisees.  What really shows whether you are paying attention to what God wants is what comes out of your mouths and is revealed in your actions.  Then this Canaanite woman (and therefore ritually unclean) approaches Jesus and asks for mercy.  She is asking for healing for her daughter from the Jewish God even though she doesn’t deserve it because she is not a Jew.  How far does God’s mercy reach?   Jesus hesitates.  He replies, “I was sent only to the lost sheep of Israel” (vs. 24).  Now some commentators have explained this by saying Jesus was only testing her faith and knew she would rise to the challenge.  But I believe there is more going on here.

Jesus may be testing her; but the woman is also testing him, and through him, God.  What does it mean to be faithful?  As Jesus has just told the crowds, it’s not keeping the tradition of the Jewish religion that is necessary, but loving God and neighbour. That’s the core and sum of all the laws and commandments.  And that, surely, is a great commandment for all to follow, including those who are not children of Israel.  The Canaanite woman is willing to lay down her suspicion and her prejudice at this Jewish rabbi in order to get at the heart of this good news.  Perhaps, like many others, she has to come to a moment when she can begin to forgive some of the things that have happened to her in the name of religion in order to take the hand of the One who can really heal.   What she needs is for Jesus to walk the walk, not just talk the talk, about mercy.

She may be from the outside, but she’s not going to go away if there is the possibility of healing.  Like many women throughout history, she’s speaking out against the expectations of those in power.  The authorities of Jesus’ time dismiss her both as a Gentile and a woman.  The inner circle of disciples (all male), just want to get rid of her.  She’s making a scene by shouting after Jesus.  She’s a nuisance.  Even Jesus refers to her with a discriminatory label.  He tells her, “It is not fair to take the children’s food and throw it to the dogs” (vs. 26).  If the people of Israel are the children, that makes her one of the dogs.  And we’re not talking about cute little puppies here.  Dogs in the 1st century were vermin, scavengers, persistent pests.  Maybe he’s homing in on her persistence, but if he had tweeted that out today he’d be accused of a sexist remark.  The Canaanite woman tosses it back at him.  “You may call me a bitch, but I have a voice and I need it to be heard before your God and mine.”   And Jesus marvels at her faith that claims God as her Master.  Here is someone who is risking to believe and trust even after all that religion has done to her.   In this process of forgiveness there is a way of healing.

The encounter changes Jesus too.  He goes on to renew and extend his public ministry of healing.  Faith, forgiveness, and healing for all are even more firmly tied together in his teaching and his actions.  His earthly life ends on the cross, where his sacrifice unites all peoples in the ultimate act of love and forgiveness.  Religion and politics may have sentenced him to death, but love and faith raises Christ up in healing power for both Jews and Canaanites, men and women, slave and free.  The one that Christians call Lord shows a face of God that some might deny:  a deity that reaches across the religious barriers that humankind puts up to include those who have been excluded from the table.

This scripture story makes me rejoice in the courage of those who have spoken up and challenged preconceptions, who have held up the gospel values of justice, reconciliation, peace, forgiveness, and healing.  That Canaanite woman never had her name recorded in the Bible, although tradition refers to her as “Justa”.  There are some like her throughout history whose names we recognize and stories we tell as evangelists:  Phoebe in Rome, Rosa Parkes in Montgomery Alabama, Malala Usefsi in Pakistan.  There are so more that we may only catch a glimpse of in the pages of a book or an item on the news.  May we, like them, find the faith to speak out for mercy: for ourselves, for others, and for those who need reminders of God’s abounding love.

An image this week of the women of Beleruse.  After an election that carries doubt as to its legitimacy, there were many violent street protests.  Then the women, young and old, took to the streets wearing white and bearing flowers.  Like the Canaanite woman, they are crying out for mercy.  Let us too ask for God’s help in overcoming the barriers in our lives, so that we may help bring God’s healing to our world.  Amen.

Bread of Heaven The Life of the Cross Love Listens