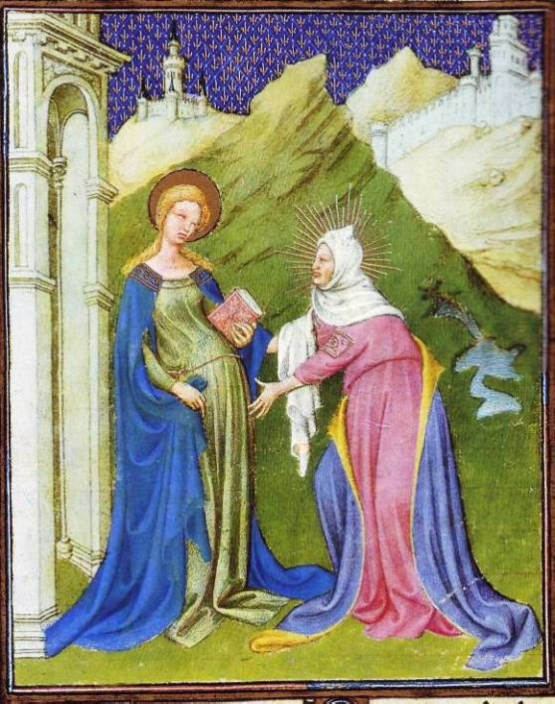 The Lord is with you.

Blessed art thou among women and Blessed is the fruit of your womb Jesus.

Holy Mary, Mother of God, pray for us sinners, now and at the hour of our death. Amen.

Today we have the meeting of two stories that merge together in a cohesive way. As we have been hearing all through Advent, we hear more about the John the Baptist, now an unborn life, that leaps for Joy upon hearing Mary’s greeting at Elizabeth’s door. For within Elizabeth the story of prophecy is created. The one who calls from the Wilderness for the way of the Lord to be prepared already begins his prophecy and points to Jesus. For within Mary, a second, yet more powerful story is being breathed and formed in his mother’s womb.

Two powerful stories, not yet born, yet are together in the same house with their mothers. Their mother’s, also being two powerful women in their own right. Let’s just imagine if we can what is being asked of these women.

As any of us who are parents, can well attest to the trials of child raising, mixed with the joys, surprises and moments of awe that raising children also brings. The same is for Mary and Elizabeth. Elizabeth will be responsible to raise John to form him into the man he will become. It is her responsibility to teach him the laws and customs of their society. It will be her responsibility to teach him the prayers of their faith and keep him connected. The same is for Mary. But let us consider further what is being asked of Mary.

As was the custom of the day, Mary would have been a young teenager when she was engaged to Joseph. While teenagers these days don’t often get engaged and married off, they do get pregnant. Raising a child is hard work as we know. Raising a child as a teenager is even harder. The cards are stacked against you even more. Any hopes, dreams and goals of studying, travelling and getting established in a career abruptly come to a hold. All of a sudden, your needs and aspirations are put aside as you now have to dedicate your time and energy to the care and upbringing of your child. Incredibly hard work, but especially for a single teenage parent raising a child under Roman Rule.

Mary raised Jesus as a single parent under Roman Rule. Very soon, while pregnant, she and Joseph will leave home, become refugees, as they travel to Bethlehem to be registered.

Throughout his life, Mary was always close to Jesus, never too far from him. Mary was there as he gathered a group of friends to accompany him on his journey. She, like any parent, would worry about his wellbeing and how he would be received in any given community he was going to. Mary was there with him when he entered Jerusalem for the last time. Mary was there, faithful and never wavering in her love and compassion as Jesus was tried and sentenced to be crucified. Mary was there at the foot of the cross as Jesus took his last breaths. It is Mary who came to the tomb to find it empty.

Now it doesn’t take much to realize that it would have taken an incredibly strong person to be able to take on this responsibility in the best of circumstances. She could have said “no” I suppose. She could have declined the invitation and decided instead to lead an ordinary life for a woman of her time. Where would we be if she had said “no?” Where would the world be? Thank God she said “yes.”

While pondering the tenacity of Mary and all that she means to us, I sometimes wonder about God and risk God took with Mary. This is the other side of the coin. Of all the people, of all the circumstances at God’s disposal, God chose to submit to the will of a teenage girl. It is almost incomprehensible to fathom. But God chose Mary. God believed in Mary and her ability to carry out this awesome request. Mary, for reasons we do not know, but who also believed in the will of God, said “yes.” God’s response, is of course, “okay then, let’s do this, I am coming.” I wonder what this says about God, a God who believes in the human condition and our potential so much, that God decides to come into our world, in the flesh and as every bit human as we are. A remarkable thought, but that is what is happening here. God limits God’s self to the human form.

This is why Advent is so important to us. We need to understand the implications of how we get to Christmas. We need to walk closely with the prophets of old who yearn and proclaim that a new day, a new world order is about to dawn. We need to know deep down that no matter how the odds are stacked against us, God comes to us, in our world, in our brokenness. We, as a people and society, love to skip over the uncomfortable bits. We see this all around us. The day after Remembrance Day it seems, stores begin to bring out the Christmas bling. Radio stations start playing Christmas Carols and the world seems to rush into the Christmas season, before Christmas even begins. We need Advent and we need to know what true longing and desperation really feels like before we can fully experience and understand the deep joy of Christmas.

We need Advent, because, whether we like it or not, real life is not filled with one joyful moment to the next. Every day we experience heartache, pain and suffering. Every day we yearn for our lives to be better, for the world to be a better place for ourselves, children and Grandchildren. Whether we like it or not, we live in Advent. We need to hear the prophets proclaim again and again, that God is coming to make all things well - so get ready. We need to hear once again how a vulnerable, teenage girl, with all the odds stacked against her, says “yes” to God. It is because she says “yes” that we can dare to have the courage to say “yes” to God ourselves. When we fully understand this, when allow ourselves to journey through Advent in the same way we journey through Lent and the other seasons of the Church, it is then that we can fully embrace the joy that Christmas brings. Christmas then becomes more than just a time to eat too much food and open presents. We begin to see more clearly that Christmas is the dawn of a new day, that the world is about to change, is changing and that God is there amid it all to carry us through the good and the bad and all points in between.

For a God who takes risks. For a God who believes in the potential of the one’s we least suspect. For all who suffer and are alone, who struggle for belonging and with faith. For ourselves to embrace the new, no matter how scary it may be. For a world that aches for better days and a better way of being. For Mary who had the courage to say “yes” we pray:

The Lord is with you.

Blessed art thou among women and Blessed is the fruit of your womb Jesus.

Holy Mary, Mother of God, pray for us sinners, now and at the hour of our death. Amen.