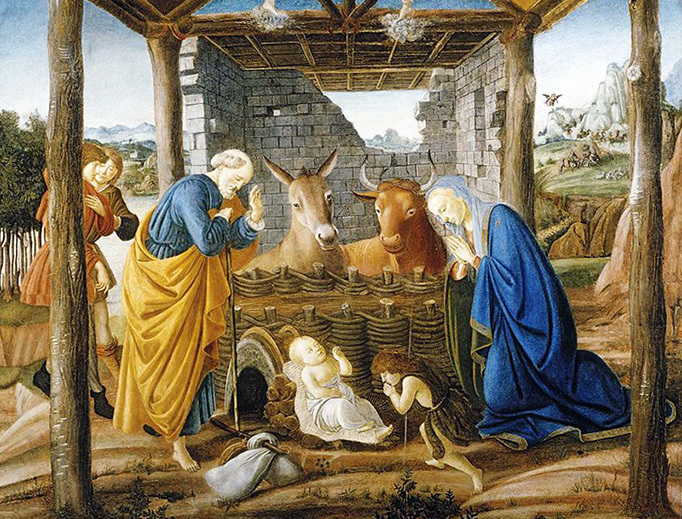 I speak to you in the name of the one true and living God, whom we name the Creator, Redeemer, and Sustainer of the world.  Amen.

You came here tonight.  I am so  glad you came.  Tonight of all nights, you chose to leave your other plans aside and make your way to this little church to share this Christmas Eve service.  For some of you, it probably wasn’t easy to get here.  Persuading family members to accompany you, or allowing yourself to be persuaded?  Trying to feed others or making your own meal in time?  Arranging a ride or helping someone else who isn’t fond of driving in the dark?  Wondering  whether it might not be a better idea to stay home quietly rather than venture out into the night?  Yet here we all are, drawn together because something special is happening tonight, and we want to celebrate it in this particular way.  Tonight we welcome the Word made flesh, who comes to dwell among us.  Tonight we welcome the Christ Child on this, his nativity.

Would it surprise you to know that Christians didn’t always gather like this at Christmas?  For the first few centuries after the birth of Christ, his followers didn’t remember his birth day.  Maybe Jesus never told his disciples the date; maybe they never asked or remembered to get him a card.  It is his death and resurrection that are anchored in history- at the time of the Jewish Passover.  So early Christians knew when to keep that feast (even though different groups disagreed about its exact place in the calendar).   His birthday, however, was not as big a deal.  People knew he had lived and died and rose again.  Wasn’t that enough?

But as the faith was passed down through the generations, his followers realized that it was just as important to proclaim that Jesus came into the world like the rest of us:  born of a mother and fully human.  The Son of God is not a theological idea.  He’s a real person.  His earthly life had a start.  He came in the flesh.  We call the act of God coming to us “the incarnation”.

Not knowing his actual birthday might have been a problem, but the Church came up with an great answer.  There is deep poetic sense in locating it to the darkest and coldest time of the year.  In Jewish spirituality, creation or conception is tied to the spring equinox, so it makes sense that the birth of the Lord of Creation should be nine months later: at the winter solstice.  Of course, Christians were not alone in viewing the turning of the year back to longer days as a holy time of rebirth.  Many world faiths have festivals welcoming the light back to the world after the shortest day of the year.  Jesus could just as easily have come among us on June 25th as December 25th, but the image of the light of the world shining in the darkness points to a central truth of the Christian good news.  By his light, we see God’s love.

By the fourth century, Christians began to gather on the night of December 25th  to worship at a special service marking the nativity of our Lord.  They shared the central rite of the faith:  breaking bread together and drinking wine as Jesus taught his disciples to do in his name.  It became known as the Christ Mass.  People heard again the Bible story of how Jesus came to be born on earth in a little Judean town called Bethlehem- the house of bread.  They sung songs that carried the message of good news of forgiveness and love.  And they encountered God here among them, in light and bread and holy mystery at the altar.

Over the years, many traditions have grown around this simple act of faith.  In different countries and cultures, foods and decorations and rituals were added to the festivities.  Some were incorporated from local customs, some from the necessity of cold winters,  some as acts of charity and generosity.  Think of what your family or culture has passed down that you think of as important to celebrate Christmas in your home.  The things we do, and the foods we eat, connect us to our history.  To who we are.  It’s why we cherish the traditions.  We try to pass them on to the next generation so that they too will stay connected to their story.

But traditions change over time, no matter how much we would like to preserve them.  Circumstances change.  Family members grow up and move away.  The weather changes plans for visiting.  Someone gets ill.  The pudding bowl gets broken. Even though we cherish the many and various ways we celebrate Christmas, Christmas still comes without them.   The Whos in Whoville knew this.  Every year brings loss and transition.  We long to hear again that there is something at the core of this night that transcends all that darkens our lives.  It doesn’t have anything to do with when, or what, but with why.  Christmas is here because God’s love is here in this world.  It is real.

This is why we gather.  It’s not that we haven’t heard stories of love before.  We’ve been told God has loved humanity from our creation, and each of us from the beginning of our time on earth.  The bible tries to show this.  Others try to show this.  God has sent people into our lives to be messengers of that love.  But we need more.  We need the Message itself that has come into the world.  “In these last days God has spoken to us by a Son, whom God appointed heir of all things, through whom God also created the worlds.  He is the reflection of God’s glory and the exact imprint of God’s very being, and he sustains all things by his powerful word.” (Hebrews 1:2-3).   So says the writer of the book known as the Letter to the Hebrews… which is not actually a letter.  It’s an encouragement, an exhortation to all who gather in the dark and yearn to understand they are truly loved because God cared enough to show up on earth.

We don’t know who exactly wrote these words, but even though it was back almost two thousand years ago, that writer speaks to our hearts too.  “The preacher is addressing a real and urgent pastoral problem, one that seems astonishingly contemporary. His congregation is exhausted. They are tired - tired of serving the world, tired of worship, tired of Christian education, tired of being peculiar and whispered about in society, tired of the spiritual struggle, tired of trying to keep their prayer life going, tired even of Jesus… Tired of walking the walk, many of them are considering taking a walk, leaving the community and falling away from the faith.” (So theologian Thomas Long comments on the passage.)   We don’t have much use for religion.  It’s not a comfort.  We want love.  The words “God has spoken to us by the Son” reminds them, and us, that there is a reason to show up here tonight.  It is because God has shown up for us.  God is with us.

Now there are some lovely traditions associated with the Christmas Eve liturgy in this little church.  Candles and carols, nativity sets and evergreens, neighbours and loved ones.  And maybe you will have a few cherished celebrations tomorrow as well.  But strip them all away and it will still be Christmas.   Two days ago the church furnace seized up.  We thought we were going to be huddling in the cold under blankets, and it’s a miracle that the heat is working again.   But it would still be Christmas.  On the CBC I heard a man telling a story about a power outage on Christmas Eve in his hometown.  He said to his wife: “Well, I guess the candlelight service at the church will be cancelled.”  “Why?”, she replied.  “Because there won’t be any light… Oh!”  Christmas finds a way to those who are willing because nothing can hold God’s love back from this world.   The light shines in the darkness, and the darkness has not overcome it.

Christmas finds you tonight.  Because no matter what else happens, you have come.  And God has come.  The Word is made flesh and dwells among us here.  The Word is Love.  As we gather, it speaks in our hearts and comes to birth.  Amen.