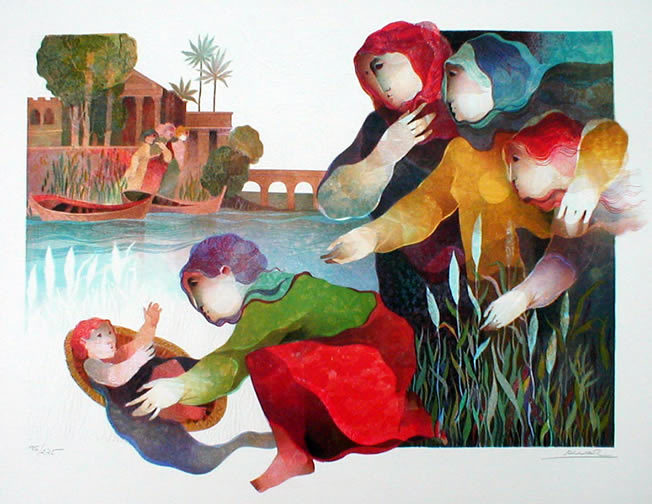 I wonder what it was like to be living in Ancient Egypt. I wonder what it must have been like for the Israelites who were enslaved to the Egyptians. Imagine working days upon days of constant hard labor, no days off, no vacation, no fair pay; just the opportunity to be a slave based on who you are, your culture, realities that we have no control, nor any choice. There are some things that we have no choice in. The color of our skin, the family we are born into for example. We are born who we are, the way we are.

What intrigues me in this story is Pharaoh’s daughter. She is someone who lives a privileged life fuller than most people in the land. She is royalty and has the life style to match. So why would she be at all interested in this baby who she takes as her son? There appears to be no real gain for her. If it were discovered that she was responsible for the survival of a foreigner – the enemy, living within the palace, the consequences for her and Moses would have been devastating. Why would she want to take that kind of risk?

Perhaps we will never know why Pharaoh’s daughter acted the way she did. We may not even really know why many of the midwives acted the way they did in allowing many other babies to survive. But what we can perhaps recognize in these people is the very nature of God working in and through people in times of great turmoil and struggle. As I reflect on the actions of these people, I can recognize the love of God that is so much greater than any amount of evil, quietly and gently pushing back against evil.

We learn something about the nature of God in this text. So often when things go wrong, when terror and hate full our news feeds we somehow expect that God will come with great power and might and show. We wait with baited breath for God and the angels and archangels to swoop down and liberate the people. We may get disappointed and even question whether God cares for those who suffer when we don’t see the full might and wrath of God rising against such evil.   But as we recognize from our own experiences and from this text we realize that God seldom works with a great show of power. God is much more subversive, flying under the radar. We see God using a power that is in fact far greater than any physical might. We see God working to touch and transform the hearts of the oppressive forces, one person at a time.

Any army can use physical power to overcome adversity. But this action seldom changes the behavior or attitude of the other. Prejudice and preconceived notions of who the “enemy” is becomes more engrained and confirmed. While the battle may be won for one side, the war is certainly not over. But when hearts are transformed and people begin to see the “other” as a person, someone like them with similar dreams and ambitions, then there is no room for prejudice and hate. Those are overcome with love and compassion. Now that is real power.

If the events of this past year have taught us anything, it is perhaps that violence and hate does not overcome violence and hate. For those of us, who have not lived through World Wars or seen on the streets overt racism and terror, we realize old fights and prejudice are only just below surface and this is a sobering and scary reality.

The events of prejudice and white supremacy that dominates the news of late is a cold reminder that while war and overt physical power may win the battle, it is going to take a stronger metal to win the war. Exodus and the early days of Moses remind the world that ultimately the metal needed to win the war is the transformation of the heart. When people recognize the shared humanity and fragility of another life; when one person, a group of people, recognize God in one another; when people recognize the other as brother, sister or son then and only then will we see a transformation of heart and mind and the opening for hate sealed for good.