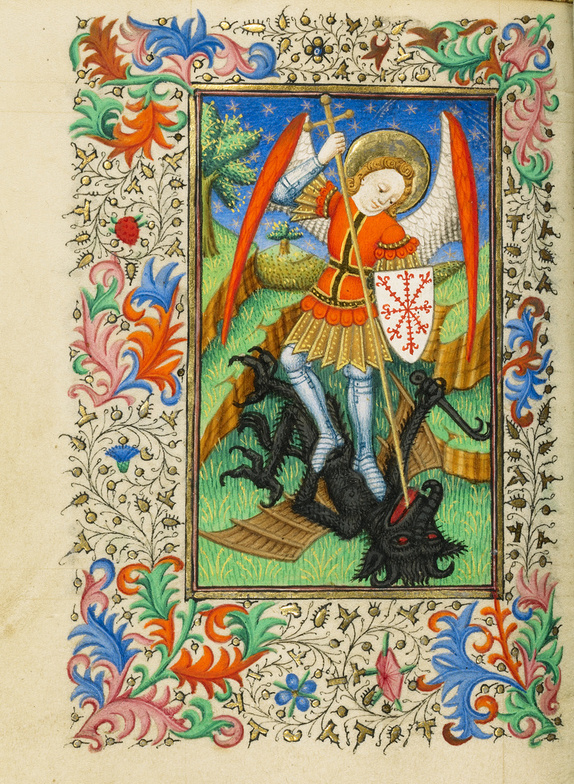 “God is on our side” is a statement that we know to be true, but somehow can always come across as an easy way out or flippant. We know God is on our side. We know that goodness overcomes evil and, in the end, the good guys are going to win. But it doesn’t always help us in the here and now. How does this help when we need someone to roll up their sleeves and be in the trenches with us now!?

That is why I like St. Michael. Here is a guy, an angel and saint, who shows up when the going gets tough. This is a guy who will wait on the sidelines and intervene just at the right moment. Just when we need him the most. We hear how war breaks out in heaven. An epic cosmic battle between good and evil. All the forces are out and stretched to the max. The heavenly powers are getting tired and need help. The Devil cannot win, no he cannot, and so it is Michael who plays the pivotal role. He and his angels fight the dragon and his angels, and they are defeated. So much so, that there is no place for them in heaven.

One of my favorite images of Michael is a statue in a church in South Africa. St. Thomas’s Linden has a wooden statue of Michael bearing down on the devil. Michael has one foot on the devil’s head, pinning him to the ground. Michael is posed with a spear in his hands getting ready to strike the final fatal blow to the devil. It is a vivid reference to our reading from Revelation today and the great heavenly war. Michael represents to me that there is always someone who is on our side, who has our back, no matter what. A person who shows up, just at the right time.

When we are up against all odds and there seems to be no way out, we need people in our lives who show up just when we need them the most. When they do show up, we know that everything is going to be okay, even if they don’t do a whole lot. Just them being on the end of the phone, a quick visit, a listening ear is enough. Who is that person or persons for you? Who is your Michael in the great battles that we find ourselves in our lives?

For me, Michael comes in the person of Diana. Diana and I have a friendship that was first kindled in my first year of nursing school where I was about to write my very first academic paper in my life. I did not have a computer at home, for some reason, this did not seem to be a necessity at the time. That assumption quickly changed.

I arrived a couple minutes before 4pm when the computer lab was scheduled to open. I stood outside with arms laden with textbooks, articles and other pieces of research I could gather. Diana showed up late, about 4:15pm - this was unusual for her I would find out. As she opened the lab and I got settled into place we began to talk. I learned that she too was a nursing student, in her fourth and final year. I was in year 1, term 1. Diana, being Diana was quite curious about what I was doing and what my paper was on. I talked about it with her at some length while trying to type. My typing skills were not great, but I was a master at the one finger keyboard.

As time went on, she asked, “so when is your paper due?” To which I replied, “Tomorrow morning” in a calm, matter-of-fact tone of voice. Diana, then assumed that I was nearly finished and that this was nearly a quick edit before submitting. Bless her. No this was me, starting to write my first words and first draft of the paper the afternoon before the paper was due. Any chance of asking for an extension had long passed. Diana nearly fell off her chair. After a couple of last-minute helpful tips and suggestions Diana thought it best not carry on a conversation with me but let me concentrate at the task at hand. She carefully mentioned that she was in the lab until 7pm, then someone else would come in her place until 10pm. “No problem” I said, “I’ll have it done!” And so, I set to the task of writing my paper in earnest.

7pm came and with that the change in shift between Diana and the new lab monitor. Again, after some brief introductions I was left to my work. I can’t remember if I stopped for dinner or not, but at 9:45pm I looked up from my computer and said, “I’m done!” With that I hit save and print. The lab monitor looked up from her dinner in disbelief and exclaimed, “well done!”

Later I learned that Diana had mentioned to her replacement my predicament and asked that, if need be, she stay a little longer for me to finish my paper. The lab monitor had agreed.

From that day, Diana and I have been the best of friends ever since. While we live in different cities and have different lives we still keep in touch. Sure, there are long stretches of time when we don’t talk and aren’t able to catch up with each other. But as sure as anything, the moment one of us texts or calls the other, we pick up right where we left off and are fully present for the other. We have been there for each other through the joys and pain of past relationships. As each of us began our careers in nursing, often working often on different shifts, we would call each other on a break and recount how our shift was going. She was the “Best Woman” at my wedding and I had the honor to officiate at her wedding. Recently she called me. She and Victor (her husband) were racing to Calgary to see her father-in-law one last time. He had been in palliative care for some time and tonight it didn’t look good, so family were called in. She called as she Victor were entering Calgary trying to navigate an unfamiliar city late at night. We talked and laughed as poor Victor concentrated on his driving. We both know that it doesn’t matter what time of the day or night it is, all we have to do is pick up the phone and say, “hey it’s me . . .”

Who is Michael in your life?