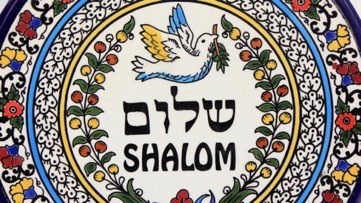 “A City of Peace”

Come, let us go up to the mountain of the Lord, to the house of the God of Jacob: that He may teach us his ways and that we may walk in his paths.  Amen.

In spite of its name, Jerusalem has seldom been a city of peace.  Not back in the days of Isaiah the prophet.  Not now.  Part of the problem is the location.  Put a capital at the crossroads of several civilizations and religions, and there is bound to be some fighting over who controls it.  But Jerusalem is as much an idea as it is a place.  For millennia Jews and Gentiles, Christians and Moslems, have been in conflict about what we mean when we say we want peace.

Maybe Isaiah can help.  If we go by his account, the prophet was speaking publicly from the year King Uzziah of Judah died, about 738 BC.  It was a time of intense political and military conflict.  Syria and Ephraim to the east are rising up as the monarchy started by David is crumbling away.  The city that David took as his seat of power was understood as God’s dwelling on earth.  Just as the king was to be a mirror of God’s glory, so the people were to be reflective of God’s holy and righteous way.  But that is not what the prophet is seeing.  Instead there is corruption and idolatry and injustice.  God cannot live in a moral slum, so Jerusalem must be purified.  Change is coming. Isaiah begins by proclaiming a day of judgment.  Through purging these institutional evils, he says, the new city of peace can emerge in glory.

Those who pay attention to God’s call to “shalom” will learn God’s ways.   It appears, however, to take time and effort to understand what this concept means.  In the Hebrew, “shalom” doesn’t just translate as peace.  At least, not peace in the sense of an absence of conflict or hurt.  Shalom covers the whole range of relationships in daily human life and to the wider creation.  Perhaps adding our English words “wholeness”, “wellbeing” or “harmony” might help.  It concerns the ideal state of God’s people.  Not just the individual; the crux is that shalom is something that is lived out in community.  Think big here: it is the normal and proper condition of all creation, not just your friends or neighbourhood.

Shalom is extended outward to others through covenant.  God offered that covenant relationship to Noah after the flood, and to Abraham, and to the children of Israel through Moses and David.  God offers that covenant to us through Jesus Christ.  But God doesn’t intent to stop there.  Whoever responds to the invitation to shalom can be drawn into the new Jerusalem that is coming.

But we are warned that committing to this vision changes our relationships to the world.  We are going to be purified, purged, of old habits and prejudices and privileges.  Entering into God’s shalom is political.  If we are part of the polis, the people under God’s law, we have to respect God’s judgments and arbitrations.  And in some areas, that may mean radical changes in our lives.

Look for a moment at that beautiful line of prophecy in Isaiah 2:4:

“they shall beat their swords into plowshares,

And their spears into pruning hooks;

Nation shall not lift up sword against nation,

Neither shall they learn war any more”

This is a powerful statement for God’s reign of justice and peace, but it is also a paradigm shift that is difficult for many to grasp and engage.  The prophet speaks of a re-purposing of tools that were used to wield power through force, but he is also implying that there will be a whole different way of living in society.  People will have to learn or relearn skills that will feed each other instead of taking lands and livelihoods.  When all you have known is how to “learn war”, how do you build a new economy?  I wonder what we might have to give up or repurpose in order to go forward?

Reforming through trial is a recurring motif through the Bible and our history.  This last year has taught many that there are different ways of doing things, ways that a few months ago we might have thought impossible.  Automotive plants have closed in the labour shutdowns, yet at least one facility is preparing to reopen to assemble electric vehicles.  The number of people suffering in the pandemic has driven the research for a vaccine at a pace never before seen in science for the good of all nations.  Historical injustices that have been simmering for decades are being brought into the light through recent demonstrations and activism.  We, as people of faith are part of the conversation to discern the challenges and opportunities of our time.

Psalm 122 is the song of a pilgrim going to the city of Jerusalem for one of the festivals in the Temple.  It is called a psalm of ascent because the final approach to the gates is uphill.  It takes energy to get up to the gates.  The people of different races, classes, and cultural backgrounds come together to sing “for the sake of the house of the Lord I will seek your good”.  We too are encouraged to recognize that the wellbeing of all depends on listening to the word of the Lord as it applies to our own place and time.  Jerusalem is more than a physical city that is at unity in itself.  It is a way of being we can live into, with God’s help.

In Isaiah’s time, the Temple and the walls of the earthly city were broken down by foreign armies.  The people were killed or captured or scattered far from their spiritual centre of worship.  Yet in their hearts, they took Jerusalem with them.  They continued to celebrate the festivals of the year in far-away lands.  They gathered in small households around the table to break bread and drink wine.  And the toast is always, “Next year, in Jerusalem”.   Today it is still difficult to visit the holy city for many reasons, and there is still tension because of its potency as a symbol for Christians, Jews, and Moslems.  Yet if we truly want peace, we need to seek shalom.

I know that feels difficult right now.  We are all scattered in different ways, separated from our family and friends and traditions.  That doesn’t mean we can’t help build a city of peace.  Look at the provincial election yesterday.  In spite of the barriers, people across British Columbia had the opportunity to participate in political action that expressed their hopes and priorities.  Now we have to continue to find ways to listen and work together with the ones who have been elected on our behalf.  And we have to hold them to account: both in behaviour and in decision-making.  Concrete actions are possible: building blocks, if you like.  For example, how can we now open the conversation with our local Member of the Legislature about the wellbeing of our local riding?  Perhaps with an email inviting him or her to share the needs and hopes for our area?  Just because we haven’t done it before doesn’t mean we can’t.

When we speak of a peace that passes all understanding we are proclaiming a way that draws us in to God’s shalom.  We Christians know him as Jesus Christ, the one who brings us into the new covenant.  Jesus is both our judge and the one who is able to repurpose us for the kingdom.  We do not need to be fearful about putting our feet on a new path as we say “Come, let us walk in the light of the Lord!”  Amen.