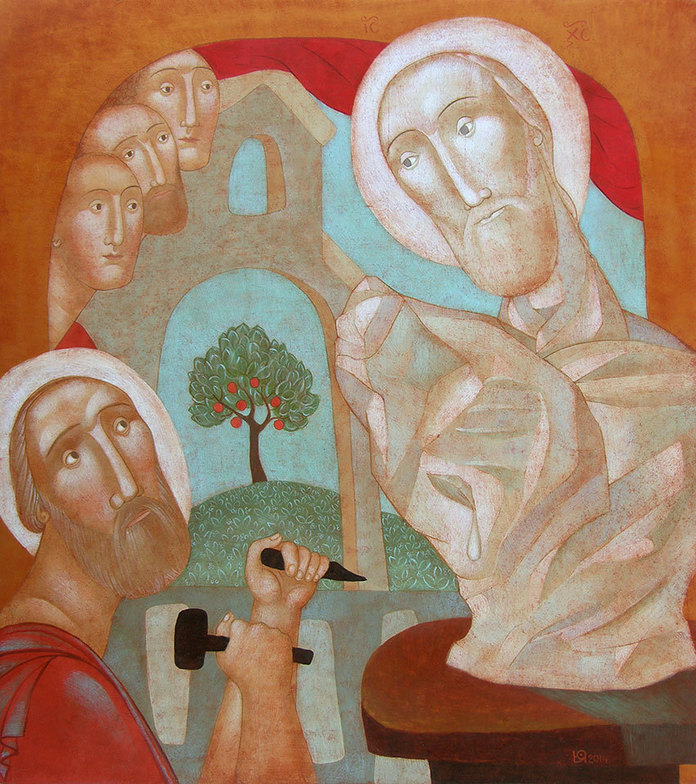 V  I think Thomas gets a bad rap!

V  We traditionally refer to him as “doubting Thomas” and single him out, somehow as a second-rate disciple, because he couldn’t believe the unbelievable.

V  He’s even been adopted into our language to describe someone who is overly suspicious.

V  "I won't believe it unless I see the nail wounds in his hands, put my fingers into them, and place my hand into the wound in his side.", according to the New Living Translation.

V  But, in truth, it seems a perfectly reasonable response, doesn’t it? I suspect many of us would say exactly the same thing. How could he make sense of a story that someone he knew was dead was somehow alive again?

V  Maybe he thought the other disciples’ claim to have seen the risen Jesus was just wishful thinking on their part.

V  And let’s face it – the others already had the benefit of having seen Jesus the week before, – and Jesus had spontaneously shown them the wounds in his hands and his side. So what’s the big deal about Thomas asking to see what they had seen?

V  I’ve always imagined Thomas as an engineer. No offence at all to people who are engineers. But in my experience, they usually want to go with the data - you don’t guess when it comes to the loads that construction can support.

V  Do you remember that great passage from John 14? Jesus said – ‘In my Father’s house there are many dwelling-places. .... 3And if I go and prepare a place for you, I will come again and will take you to myself, so that where I am, there you may be also. 4And you know the way to the place where I am going.’* 5Thomas said to him, ‘Lord, we do not know where you are going. How can we know the way?’

V  “Jesus, you’re talking in riddles again”, says Thomas. “Just tell me which highway you’re going to take – show me on the map! And I’ll be right there with you.”

V  And I suspect we all know and love people like Thomas, don’t we?

V  And our translations of Jesus’ words are a little unfair. Our translation says – “Do not doubt, but believe.” The Greek text has Jesus saying, literally – “do not be unbelieving, but believing”. There’s a sense of progression here – moving from one perspective to the other. Not so much an “either/or”, but a step on the way.

V  But laying it one even more, according to the writer of the Gospel of John. Jesus told Thomas, "You believe because you have seen me. Blessed are those who haven't seen me and believe anyway."

V  But, to be honest, this is an example of the ways in which I sometimes find myself struggling with John’s Gospel.

V  Or, to be more precise, why I think it’s always important to bear in mind the context in which the Gospel of John was written, when we read what he (or possibly she) had to say.

V  John’s Gospel sometimes comes across as being more judgmental and certainly more exclusive as opposed to inclusive. Just think back to John’s Passion story – “the Jews” did this, “the Jews” did that.

V  Not totally consistent, perhaps with Jesus’ broader message of love and forgiveness.

V  John’s Gospel is probably the last of the 4 biblical Gospels to be written. It’s believed it was written sometime between 85 and 100 CE.

V  And the eye witnesses to Jesus’ ministry would have pretty much died off by then, so there was virtually no one left who had actually seen Jesus, either before or after the resurrection.

V  So it was important for the Gospel writer to provide encouragement for a new set of disciples who had not seen for themselves.

V  You can imagine people of the time saying – we’d happily believe in Jesus Christ if the things you are saying about him are true – but there is no longer any eye-witness evidence. Which is essentially what Thomas was saying – show me!

V  And of course, that pretty much applies to us in our context. We haven’t had the same direct experience of seeing the risen Christ, that Mary Magdalene and the disciples in the locked room had.

V  Many people I meet question whether they are authentic Christians, because they have doubts. Most of the time they believe, sort of, that Jesus was the Son of God – but that’s only the beginning of the journey. There’s so much more stuff for us to wrestle with – and we find ourselves sorting through what aspects of the faith, we can accept unequivocally, what aspects we struggle with, and frankly, what aspects we don’t seem to be able to get to, however hard we try.

V  But what if we’re more like Thomas and really need more information, something clear and tangible that we can hang on to?

V  When he does see Jesus, his response is loud and clear – “My Lord and My God.” He is the first disciple after the resurrection to confirm out loud what the implications of this extraordinary event are.

V  This is indeed God manifested in human form. Of THIS, “doubting Thomas” has absolutely no doubt.

V  We don’t hear a lot in the Scriptures about the individual disciples after Easter.

V  We know that Peter became the founder of the Church as we know it – the Church that started in the Mediterranean and found its centre at the centre of the Empire in Rome, which is why Peter is considered the first Bishop of Rome.

V  The Church Carol and I attended before I started studying for the priesthood was St. Michael’s in Colebrook, and there were many people in the congregation, who were originally from the Kerala region at the South West tip of India.

V  Of course, being born and bred a colonialist – I did grow up in Britain after all – at first, I assumed these folks were converts from the days of the British Raj in India and that was how they came to be worshipping in an Anglican Church.

V  What I learned was that these people are actually known as Martoma Christians, or St. Thomas Christians. It is their tradition and their firm conviction that the founder of their Church – whose members were known in the records as “Nazranites” – was in fact, St. Thomas.

V  According to their tradition, Thomas was commissioned to spread the Gospel to India at the Great Council of Jerusalem and arrived in Kerala or Malabar in the year 52 CE.  They believe that he founded 7 Churches in the region, before he was killed in a hunting accident (it may or may not have been an accident).

V  Marco Polo referred to the presence of Christians and Jews in the region, in the 13th Century long before any colonization, and when the Portuguese explorers arrived around 1500, they found established Christian communities.

V  So perhaps Thomas was the rock on which the Indian Church was built – and the conviction he gained when he saw “the nail wounds in Jesus hands, and the wound in his side," may have sustained him in a very strange and exotic place and at what must have been a lonely time

V  Maybe Thomas wasn’t a second rate disciple, after all. He was just someone who needed to know what was what.

V  In other words, he was a disciple in a way that was true to his personality.

V  There’s nothing wrong with having doubts – it is those doubts that spur us to engage in the questions of faith.

V  Paul Tillich “Doubt is not the opposite of faith; it is one element of faith.” Certainty is a wonderful thing, but it doesn’t encourage us to keep working at it, to keep our minds open.

V  Annie Lamott “The opposite of faith is not doubt, it’s certainty.”

V  Now don’t get me wrong, I am full of admiration for people whose conviction is rock solid, but there is a danger in that.

V  Have you ever met the Christian with whom you can’t have a conversation, because they just “know” and if you don’t happen to be in that place, it means you are inadequate – either inadequate as a person because you’re obviously not very smart, or at the very least, not a very good Christian.

V  But that flies in the face of the way Jesus taught us. He so rarely taught us by “telling”. He taught us by inviting us into stories – his parables - and invited us to figure out what they meant from our own perspective.

V  And he taught by showing – by providing an example of the kind of life and relationships God created us for.

V  Personal favourite – Verna Dozier (“The Dream of God) “the opposite of faith is not doubt, but fear.” The fear to go forward, the fear to engage in our own faith journey, which becomes the fear to take our faith out into the world.

V  DM Hall “fear tells us to flee or fight…to hunker down, hide, escape or to attack. Faith tells us to hope and create.”

V  After all, is that not at the core of what the Easter story is about – the conversion of fear and despair, into hope and creativity? REPEAT

V  And a huge part of that story was Thomas the doubter. Who put into words the question I think we were all asking, but who then went on to be the rock of the Church in a far flung part of the world, where the other disciples didn’t venture.

V   Thank God for “doubting” Thomas and everyone like him!